EDIT 1/18/17: This post is pretty outdated now… like how I talk about crediting miles to AAdvantage instead of Alaska? What a moran! Oh, and I never did end up taking the NYC-VAN flight on Cathay with my younger brother, although I’m sure I’ll get around to it at some point. Anyway, now that this post has been linked from higher-traffic pastures, I figured I’d mention this at the beginning so you know that I’ve matured as a Windbag Miler in the year and a half since this was originally written.

Disclaimer: I wrote most of this post longhand while I was flying last weekend, since the guy in front of me reclined his seat, and I didn’t have enough room to open my laptop. Due to my issues with flying (which I’m sure I’ll talk about at some point), my mind is kind of weird when I’m on a plane, and that’s reflected here… although I swear I kind of meant this to be tongue-in-cheek. Enjoy!

Looking at all the airlines, popular routes, mileage programs, and credit card options for earning points, a complex tapestry emerges. I’m reminded of Deleuze and Guattari’s essay on smooth vs. striated space, and how points/mileage enthusiasts find themselves wedged between the two (or, more accurately, lost in the fluidity between the two). It’s tough to think of any space smoother than the sky, but the way we traverse it in direct lines overseen and organized by a vast traffic control infrastructure converts what was previously thought to be smooth into striated space. In the same vein, the rules, terms, conditions, charts, redemption amounts, and everything else I try to memorize (or at least familiarize myself with) takes the freewheeling act of travel and imposes a rigid set of steps I have to follow in order to undertake a trip. However, in the sheer volume of information, including counterintuitive or contradictory rules and policies — that’s where the fun lies. And so, the mess of numbers, programs, the whole ball of wires that makes up “the hobby” starts to feel like Deleuze and Guattari’s famous quilt, which simultaneously consists of the orderly arrangement of fibers at the same time that it expands outward until the wide-angle view reveals a structure that doesn’t seem to follow any defined rule or pattern.

Okay, that was a long, probably boring way to make two points. First, it’s really fun to dig into all these programs to try to find hidden gems, and second, you’re never going to know all there is to know, so the best thing to do is just to never stop digging. With that in mind, I started digging into Alaska’s Mileage Plan program, since I fly to Seattle on Alaska at least a few times a year. (I choose Alaska mostly for the occasional $50 upgrade and the fact that Alaska flies out of SFO’s international terminal, so the plane spotting opportunities are much better.) I always credit my flights to Amercan, since one of my longer-term plans is to bank AAdvantage miles slowly and then augment my balance with a big sign-up bonus before using my miles for a long-haul business class redemption of some kind. It goes against the conventional wisdom of earn and burn, but truthfully, I’m not earning enough for the inevitable devaluation to really hurt that bad.

But, I wanted to see what I was missing out on with Mileage Plan, since it’s so highly regarded in the points and miles world. Plus, it was on my mind after writing that post about Starpoints. Most of Alaska’s more interesting redemptions are on carriers I don’t really have occasion to use, specifically because I don’t have any immediate plans to fly to Asia or the middle east. However, when looking through their partner award chart, a particular redemption caught my eye: 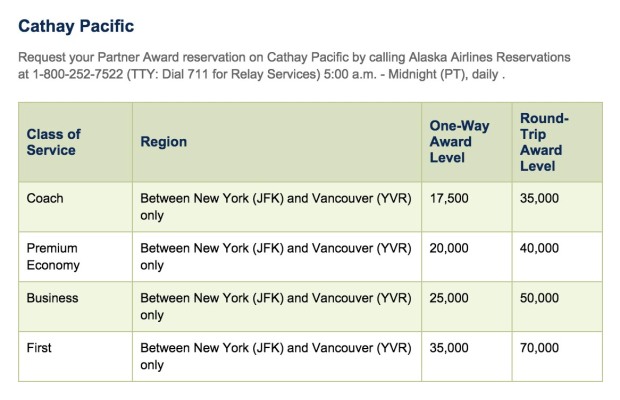 Cathay Pacific first class is one of those products that gets reviewed amazingly well from just about everybody. They don’t have an on-board bar or shower suite, but the seat looks divinely comfortable, and the service is supposed to be pretty good too. (Also, I know everyone raves about the novelty of showering on a plane, but I’m severely put off by the not-unlikely prospect of hitting turbulence and sitting belted-in on the shower’s safety bench nude and dripping wet while the plane lurches to and fro.) Plus, true first class is kind of a forbidden fruit for me, since I have very eurocentric travel goals, and one of the bummers about flying to Europe is that first class is tougher and tougher to come by… and when first class cabins do exist, it’s either difficult or prohibitively expensive to book awards in them.

So, imagine my delight when I found that Cathay Pacific runs a fifth freedom route (a route on which neither the origin nor the terminus is in a carrier’s registered country) between JFK and Vancouver. Cities I love and would happily travel to in order to enjoy a premium cabin I otherwise wouldn’t get to experience. (Fifth freedom routes are pretty cool in general, and at some point my goal is to fly in first class on both Emirates (NYC to Milan) and Singapore (NYC to Frankfurt).)

After some more research, I realized that both Lucky and The Points Guy have written about this route, but I missed it – again, due to the sheer volume of information that’s out there. Then, once I realized that the route exists, I found out that I can book it with Asia Miles (for 40,000 miles), which I can earn via transfers from Citi or Amex (meaning that the whole detour into Alaska miles wasn’t even necessary). Given the ease of earning Thank You/Membership Rewards points, it’s probably easier to book this way, although I’m hoarding points in those programs right now. As a result, I decided to do a Mileage Plan blitz and found myself with 39,000 Mileage Plan points almost overnight. (How did I do this? 25,000 points came from getting the Alaska Airlines Visa card, which awards the miles without requiring a minimum spend. Then I got the other 14,000 from my Chicago hotel stay, which I booked on Rocketmiles. Almost 40,000 Alaska miles in a weekend, and nary an SPG Amex in sight!)

I’m planning the trip for next June, and I’ll be traveling with my younger brother, since he’s the only person I know who appreciates premium cabins as much as I do. He’s based in Chicago, so we’ll meet in New York (which I’ll probably fly to on a paid Jetblue ticket so I can check out their Mint class), travel to Vancouver on Cathay, and then hang out in the Pacific Northwest for a while before returning home. It seems kind of crazy to fly to Vancouver via New York, but I’m the guy who started a blog post on points and miles by talking about French poststructuralists, so crazy is more or less the unifying theme here.

Requisite question designed to spur a flurry of responses in the comments section: What’s the most ridiculous routing YOU’D take just to fly a product you’ve never tried before?