If you read this blog (which you don’t, because no one does), you’ll know that I’m a huge fan of Gary Leff and his View from the Wing blog. His headlines are sometimes a little clickbaity for my tastes, but he churns out posts like no one’s business, and he seems to find deals and loopholes that aren’t already being talked about on Flyertalk and Reddit. Thanks to Gary, I found out about the City National Bank Crystal card, out of which I have wrung $2100 in cash-equivalent value in the first year (not to mention benefits like a free Priority Pass membership for my wife and free CLEAR membership for both of us). Plus, he has a dry sense of humor that a lot of Boarding Area bloggers lack, and he doesn’t shy away from important news like the woman who boarded a Virgin America flight without pants on.

I emailed Gary last night with a question about a pricing quirk on Hyatt’s website – specifically, that the Hyatt Regency in Paris was showing standard rooms for $625 (an outrageous rate for a mid-tier hotel located on the outskirts of Paris proper) but had club upgrade awards for $21 + 3000 points. Club upgrade awards are different from normal points and cash awards, which include a standard cash co-pay determined by the hotel’s award category. Club upgrade awards combine the full standard nightly rate with a 3000 point “fee” that covers the upgrade to the superior room category. That’s why this rate caught my eye – it should have been $625 + 3000 points, but for some reason the price was loaded into the website incorrectly.

The reason I emailed Gary as opposed to anyone else is that he posted earlier in the year about a different mistake fare at this hotel, and I was curious if Hyatt ended up honoring that rate. I’m also fairly new to booking mistake rates at hotels, and I wanted to make sure I wasn’t putting myself at risk of Hyatt changing the price on me at check-in and putting me on the hook for $600+ per night. I went ahead and booked three days anyway, since I’ll be in Paris for work next June, and I have a lot of time to make alternate lodging plans if Hyatt cancels the booking in the next 9 months.

Cut to this morning, when I saw a post of View from the Wing about an incredible deal at the Hyatt Regency Paris. Imagine the pride I felt this morning upon seeing a post about that tip from humble old me! 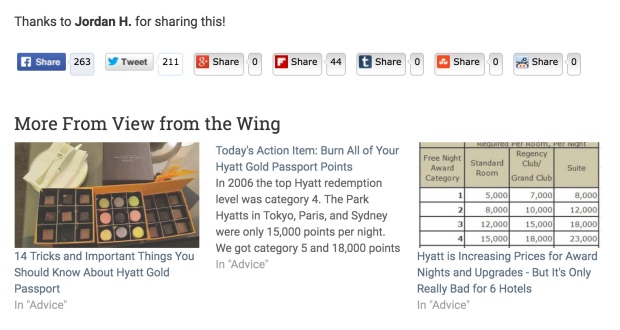 Jordan H.! That’s me, by the way… the “H” stands for “Holy shit, I found a tip worthy of publication on View from the Wing!!”

The hot deal in question is dead, unfortunately. Posting it on one of the main points/miles blogs generated a surge in bookings (and at least one ill-advised call to verify if it was real), which prompted Hyatt to turn off all award availability at the hotel for all dates from now until eternity.

This brings me to the other part of this post: should I have said anything about it in the first place? Talking about a deal is a surefire way to get it killed, and I didn’t gain anything from opening my big mouth about it. The chances that I slipped under the radar with my amazing deal would have been a lot better had I not caused an uptick in club upgrade awards at this hotel (although, to be honest, the odds of Hyatt never realizing they’re giving away expensive rooms for next to nothing were always pretty small). I won’t even get a $200 gift card out of it, which is what The Points Guy supposedly sends you if you send them a publication-worthy tip. And since no one ever reads this blog, I won’t even get a bunch of clicks from it! Truly, I am a selfless man.

However, one thing in the points and miles community that drives me absolutely fucking nuts is the “surfing sucks – don’t try it” mentality. (When I lived in Santa Barbara, surfer bros would put bumper stickers with that phrase on their lifted trucks as a way to demonstrate that they were old school and didn’t want noobs crowding their tasty waves.) People on Reddit who have been churning for three months all of a sudden act like they’re the chosen gatekeepers of all the information and begrudge anyone who gives content away for free, lest “the hobby” become overcrowded, killing all the deals for everyone. People forget that they were new to this at one point too, and the article about the Chase Sapphire Preferred on whatever Boarding Area blog they stumbled onto that day was their entryway to this wonderful world of premium travel for pennies on the dollar.

The idea that a chosen few churners should be privvy to all information and get to decide who gets entry into their elite circle is bullshit. The crackdown on churning from the main credit card issuers has as much to do with a growing economy as it does the blogs that foist these cards on people (something I have absolutely no problem with and would do in a heartbeat if I had the chance). I see the allure of an air of exclusivity around whatever you do for a hobby, but there are THOUSANDS of churners out there, so you really aren’t unique. Anyway, congrats if you got in on the Hyatt deal, but don’t get pissed at the people who promoted it, or the folks who jumped on it right away for missing your shot. There will be other deals in the future for you to guard like nuclear codes so you can feel good about how exclusive you are.