Why hello there! I’m cheery today because I’m coming to you live from the Delta Sky Club in SFO. It’s kind of an interesting lounge, since Delta barely serves SFO, so it’s odd that they’d spend the money to make a lounge so nice. But they did, and I’m certainly not complaining. Outside of Amex’s lounges, this is the nicest US lounge I’ve been to, if you’re judging only by interior design. (Also, I just learned today that it’s Sky Club as two words, and not SkyClub, as I’ve been writing. I suppose this is to be expected from an airline whose full name is Delta Aerial Linears.)

Also, this blog has had a bunch of new readers lately, so it’s a good time to remind everyone of my scientific 80-point scale to assess lounge quality. I haven’t seen this scale spread across the point/miles blog industry yet, but I expect it to catch on any minute. I’ve determined that these eight categories are the most important markers of a lounge’s overall quality, and I feel that they can be used worldwide with no modifications. 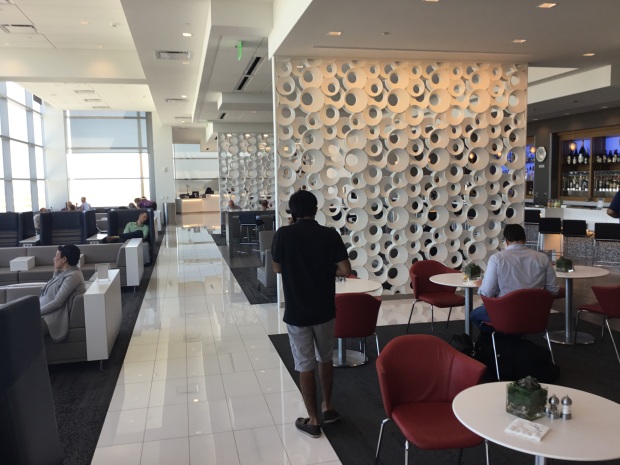 (I just took this photo with my iPad. Go find Lucky’s review on One Mile at a Time if you want more photos.)

Furnishings: Oooh, they’re giving Amex Centurion lounges a run for their money. Very sleek and modern, but not to the point of having angular furniture that’s uncomfortable to sit on. While the dividers create the illusion of a larger space, I should note that they would be nightmarish for a trypophobic person. 9/10
Cookies: I was going to give it a higher score, but my wife provided a second opinion, which was lower than mine. The good: lots of choice. Lemon bars, brownies, and two types of cookie. The bad: the cookies are middling, and not nearly chewy enough. But the lemon bars are outstanding. 9/10
Snacks: Points for effort and creativity. While most US lounges just have shitty snack mix and banana-chip-heavy dried fruit mix, Delta at least tries to create a diverse spread. I’ve noticed their effort in the Salt Lake City lounge as well, although there are more total dishes on offer here. Unfortunately, they’re all terrible, so I’m managing to subsist on lemon bars and some hummus. OH YEAH AND DON’T WORRY, THERE’S SOUP. There’s also a good dine-for-pay menu, but I don’t count food that isn’t free in these scores. 4/10
Alcohol: A good amount of free alcohol, although I’m taking off points for Delta’s audacity to encourage people to spend SkyMiles on champagne. 7/10
Views: Great views! The only downside is that you face away from the international terminals, so you don’t get to see any of the heavies. In fact, most of your view is of Virgin America planes, but you also get a nice view of planes taking off and landing. Plus, the slightly skewed perspective makes planes on parallel runways look like they’re going to crash into each other, which is fun. 8/10
Bathrooms: I just got back from them, thanks for asking. Stalls have lots of privacy, which is something that’s oddly lacking in other lounges. They also have these fancy red sinks and brand name toiletries, so you come out smelling fresh as a rose (a rose who just used a fancy sink to wash its hands). 9/10
Outlets: Ubiquitous. 10/10
Other amenities: This lounge is great. The only issue is that it’s kind of small – bigger than the Centurion Studio in Seattle, but smaller than the Centurion Lounge here at SFO. It’s fairly crowded in the early afternoon on a Wednesday, so I could imagine it being packed during peak times. What else? They have a display of Taschen art books to peruse, they have a coffee machine that makes hot chocolate, and they even have a jar of mini marshmallows that you can use as a garnish. It’s the little touches, you know? This is a lounge worth getting to the airport early for. 10/10
Final score: 66/80

Now, as an extra added treat, I’m going to let my wife Justine add her two cents in a brand new feature called Justine’s Corner. So Justine, take it away!

This place is laaaaame.  That is all.