Raise your hand if you saw “AF” in the title and thought I meant “annual fee.” Anyway, I was poking around and found really great availability on SAS to Europe right now. The below screenshots for February and March are for four passengers in non-stop business class to Copenhagen. I think this is a bigger deal than the Austrian seats mentioned last week, because SAS has no fuel surcharges through Aeroplan.

We’re not quite in every-day availability territory yet, but I’m seeing at least two days a week for four people through the end of March (and in most cases into the first week in April). The best is from Chicago, although between SFO, ORD, and IAH, you should be within a few hours of a departure point. It looks like SAS released all this space as a block, since most of it dries up after the first week in April.

(Also, not for nothing, but Star Alliance space in general is wide open right now. I specifically searched for direct flights when putting this post together, but every city I searched had decent transatlantic availability between SAS, Swiss, Lufthansa, and Austrian even if direct flights weren’t available.) 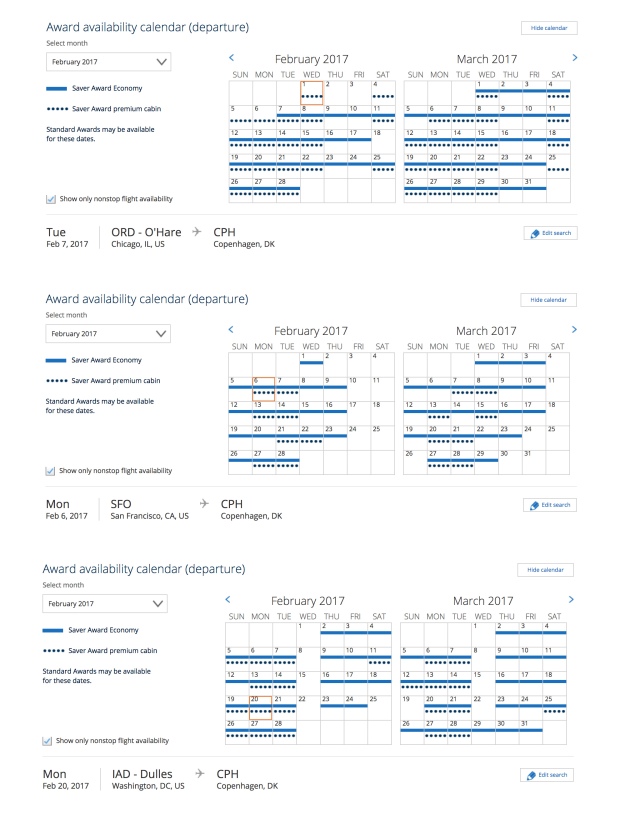 One list thing – BOS-CPH has some availability as well. It’s not great, but there are four seats available every day for the first week in April and scattered availability before that. I mention it specifically, because this is one of the flights that intrigues me the most. It’s on a 737 operated by PrivatAir, and for a while it was a business-class only plane that went from IAH to Stavanger, Norway – basically a private flight for fat Texan oil executives. According to ExpertFlyer, they’ve added an economy cabin, although I couldn’t actually book economy seats through SAS’s website for some reason. Even though the seats aren’t the most modern business class space pods, there’s something neat about taking one of the longest 737 flights in the world.