It’s old news by now that Hyatt is relaunching their loyalty program under the “World of Hyatt” banner, including a realignment of elite benefits across four new tiers. Where it used to be a simple member/platinum/diamond hierarchy, it’s now split into “Member,” then “Discoveratrix,” then “Exploratoire,” and finally “Globalickity.” How they came up with those names is beyond me, but those are the actual names, despite what you may have seen elsewhere.

I have Hyatt Platinum status now and will be downgraded to Discoveratrix on March first when the new program launches. I was mad about this at first, because I thought I was losing my 2PM checkout benefit. However, upon checking the World of Hyatt website, it looks like Discoveratrixes still get late checkout upon request, so that’s good. I now get access to “preferred rooms” instead of room upgrades, but since I never once got an upgrade as a Platinum, that’s not too bad. I also get free water (gotta stay hydrated bruh) and a free room award night if I stay at five Hyatt brands. I think those are both new benefits, which is nice.

The only downgrade is that I go from earning 15% bonus points on stays down to 10%, although realistically that makes a tiny difference given how many points I normally earn through Hyatt stays each year. Still, it was nice to hear from Hyatt today that they’re offering me 5% bonus points through February 2018, essentially keeping me at the Platinum earning rate through my first year in the new program. Here’s the relevant part from the email they sent: 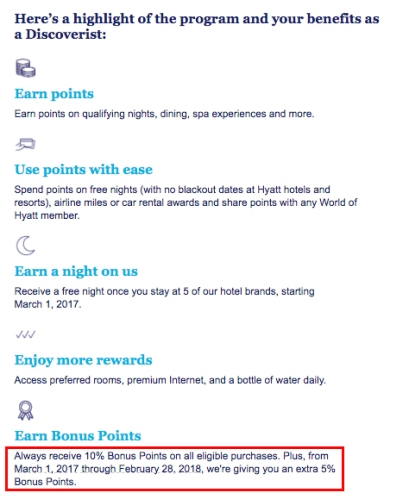 Is anyone excited about World of Hyatt? I suppose it’s good if you’re super loyal to Hyatt and terrible if you just barely qualified for Diamond status under the previous program. For someone like me, it seems like this is mostly a wash, although I appreciate Hyatt offering mid-tier people a soft landing into the new program. I should also note that the email specifically mentioned earning status by holding the Hyatt credit card, so this may not have been offered to all current Platinum members… or maybe people who earned Platinum through stays were offered additional benefits. Who knows! Is this really that important?