Hi from Belgium, blog readers! I’m tired. At this point, I’ve been up for just inside 24 hours, and I’m feeling it big-time. I’ll write more about my United First experience that got me over here, which was extremely positive… but despite what was mostly a great flight, I didn’t sleep a wink. People who do this for a living must just learn how to sleep on planes, but so far mid-flight sleep eluded me once again. Not for lack of effort, and I may have drifted in and out for a minute here and there, but there was nothing that would really qualify as sleep. It also didn’t help that the flight was pretty consistently turbulent – not so much that galley carts were falling over, but enough that ever 30 seconds or so you’d get a good jolt that shook you out of whatever slumber you were threatening to fall into.

When I planned this trip to Europe, I gave myself a challenge. I flew into Brussels because of the wide availability in United First out of Chicago (70k Aeroplan miles with no fuel surcharges = good deal IMO), and never having been to Brussels, I decided to schedule my train to Paris in the late afternoon. I knew this would be a gamble, since I usually don’t sleep at all on planes, and I was unsure whether I’d actually have enough energy when I got here to try to see a brand new city. Especially after a stressful flight (I’m more or less over my fear of flying writ large, although prolonged turbulence is really draining for me, since I have to work pretty hard to keep myself from having a panic attack), I was pretty sure as we were descending that I was going to crash out and go for my backup plan, which was to get a day room at the Sheraton attached to Brussels airport.

I managed to rally, however, and I took the airport train to Brussels Centraal, which is just a few steps from the famous Grand Place, a UNESCO World Heritage site (and for good reason). I ate French fries on the Place like a real local would (I’m assuming), and my spirits were in good spirits. I even went off in search of the Mannekin Pis statue, which is funny, since there’s not much you can do in Brussels that’s more touristy than that. But I figured what the hey, I’m only a block away, and I’m not above nakedly touristy experiences from time to time…

After a few hours of walking around Brussels, though, my feet started to hurt, and I started to realize I wasn’t going to make it until 5. I packed it in after buying a very expensive limited edition book at the Tintin Boutique (my visit to the Tintin Boutique was more like a pilgrimage, and one day I’ll finally make time to head out to the suburbs to go to the Hergé Museum like a real fan should.) 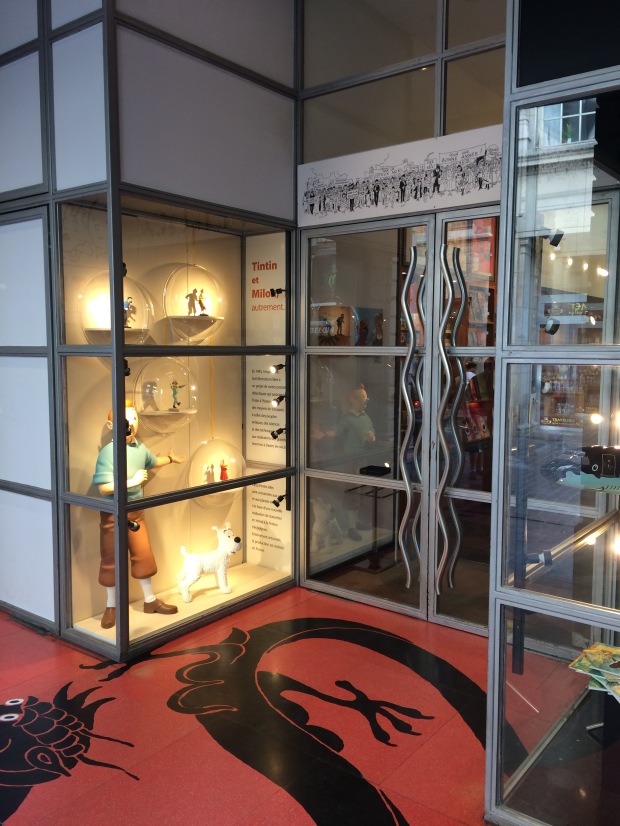 I made my way back to Brussels Centraal and hopped a quick train to Brussels Midi with the hope of “flying standby” on an earlier train. (For those who aren’t familiar with Brussels, the Centraal train station is in the middle of the city, but the “Midi” (south) station is the one from where most of the long-haul trains depart.) Quick detour here to give props to Brussels… in my limited experience, things are so efficient here I might as well be in Germany. Immigration took less than 5 minutes at the airport. At the train station, I had to take a number and wait for the customer service counter to call me, and it took under 2 minutes. (I went through this same process in Paris a few years ago, and it took over an hour.) It has been really nice not to have to wait in long, pointless lines being as tired as I currently am.

Okay, so back to the topic of this post: it turns out that the fees to change my ticket would cost me the same as my original ticket, and I wouldn’t even be in first class anymore. Not that it really matters on such a short trip, but the prospect of paying $75 AND getting downgraded seemed like a double-whammy, so I resigned myself to waiting three more hours for my train. I figured I might as well check out the neighborhood around Midi station, but I am just completely and totally out of gas at this point. I wasn’t sure what to do, so my best option seemed to be to leave the train station and find a cafe that I could kill a bunch of time at.

I noticed some signs on my way out of the train station that said “Thalys Lounge,” though… and the thought of any sort of lounge at that point was pretty much the best thing I could imagine. It took me a few minutes to find the lounge, since it’s not actually in the train station – you have to exit the station entirely and go across the street into a separate building. I wasn’t sure if I’d be able to get in, since I had a feeling it was more something for frequent travelers or a pay-in type of thing, but the desk agent confirmed for me that anyone with a first class Thalys ticket could enter, and she opened the automatic gate to let me in. (Anyone who has been to an airport lounge in Europe will be familiar with this type of gate.)

I felt kind of stupid buying a first class ticket in the first place when I booked this trip – my rationale was that it was only around 20% more than a 2nd class ticket, and first class seating is 2×1 rather than 2×2. This would mean (I hypothesized) that my extremely tired self would thank me for allowing him to relax in a one-by seat with no one next to him for the hour-plus trip to Paris. However, extremely tired me is now overflowing with gratitude that I splurged, since this lounge is so relaxing I could almost cry. It’s not anything special, by the way. There are no snacks, just filtered water (still and sparkling) and an automated coffee machine that just made me a very decent espresso. There are plenty of newspapers and magazines, including a bunch of issues of Air France’s magazine. It’s also very small, but it’s almost empty despite a steady stream of Thalys trains leaving this afternoon. I don’t know, maybe it will pick up later on, but for now I have a whole bank of couches and chairs to myself.

This trip started with a bunch of hours spent in the Polaris lounge in Chicago, and honestly if I had to pick which one I preferred, it would be the Thalys lounge. Not that Thalys competes with Polaris on any amenities whatsoever… but I didn’t *need* a lounge in Chicago before my flight, though it was certainly nice to have. I really needed this, though, and it basically made my day that I found it. 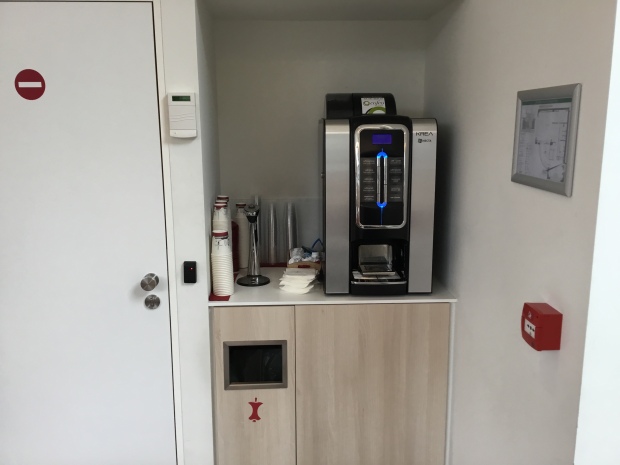 Bottom line – if you happen to be in Brussels and have a first class Thalys ticket, don’t go out of your way to visit this lounge before your trip… but if you are tired, have time to kill, and need somewhere to kill it, you probably won’t find anywhere better.