One of the pitfalls of booking travel way in advance is that the trip you take is often not the one you booked. Usually this just means some minor rescheduling that moves the flight a few minutes before/after the original time, which isn’t a big deal. Today was different – I got an email from KLM that my original flight from SFO to Amsterdam was canceled, and they automatically rebooked me on a flight for the day prior. 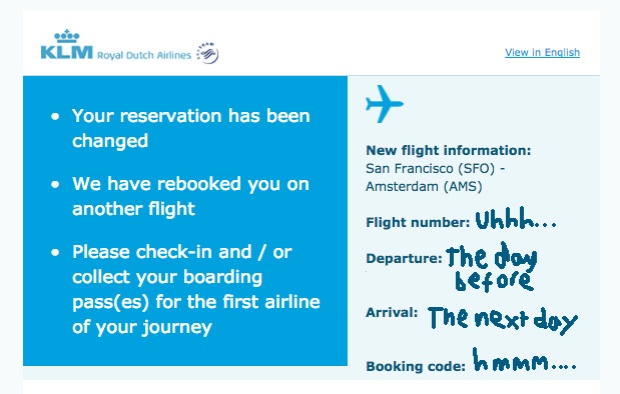 On the one hand, this kind of sucks, since a full-day change in any travel itinerary can possibly mess up all kinds of other non-refundable bookings, connecting flights, etc. For instance, if this had happened on my return flight, I would have a nightmare trying to untangle two separate positioning flights and a non-refundable prepaid hotel booking, not to mention having to update existing rental car reservations, AirBNB, etc.

On the other hand, due to some luck, KLM is basically just telling me I have to take a longer vacation and spend an extra night in Amsterdam. THE HORROR! Maybe now I’ll actually have time to go the handbag museum, or maybe I’ll just kill the entire day at Lambiek (one of the best comic shops I have ever been to)… 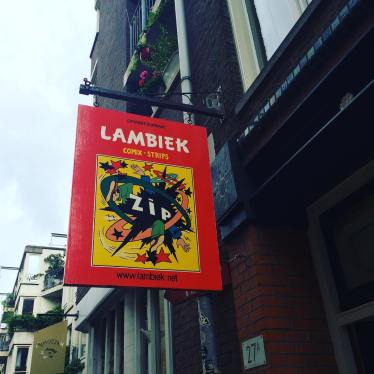 The only variable I had to deal with at this point was to figure out an extra night of hotel accommodations. Fortunately, Amsterdam is a great city to redeem points, with multiple offerings from all major chains. I could use my free IHG credit card night at the ~$600 per night Intercontinental, or my free Hyatt credit card night at the brand new Hyatt Regency nearby. There are tons of Hiltons at multiple price points, including the Waldorf Astoria, where my other three nights were already booked. I have a bunch of Hilton points due to the last round of credit card sign-ups, so it was a no-brainer just to extend my stay at the Waldorf once I saw that standard room awards were available on the day I needed them. (I know the Waldorf has a terrible reputation for gaming its inventory, so I feel pretty #blessed that I was able to put together a 4-night redemption between my points and my free nights from the Citi Hilton sign-up bonus.)

That brings me back to KLM. At first I was annoyed, because my travel plans changed without my consent. However, the more I thought about it, this seemed like pretty good customer service, considering that I had made an award booking for two seats on one of the small handful of days during the timeframe I searched that KLM had saver availability. Even though they show no saver seats on the day I’m now flying, they still booked Justine and I into the same class, and they even kept our seat reservations. I feel like this is the type of situation where you hear horror stories about airlines zeroing out itineraries or involuntarily downgrading people to economy, so my irritation with KLM pretty quickly turned to gratitude that they made this as painless as possible for us given the flight cancelation. (Why the flight was canceled remains a mystery, given that they usually have a daily flight between SFO and AMS.)

I haven’t been shy about my brand loyalty toward KLM, so perhaps that puts me in a forgiving mood in the first place. Still, for whatever reason, our original flight ceased to exist, and it sure looks like KLM was proactive in making sure it disrupted our overall trip as little as possible.

*This post brought to you by KLM. Just kidding.