I’ve been paying more attention to AAdvantage lately, having collected two big sign-up bonuses from Citibank and Barclaycard earlier this year. I now have a decent stash of AAdvantage miles, and every so often I look at ways I might want to use them in the future. The reason I’ve never been that big into this program in the past is that their transatlantic awards almost always involve British Airways, meaning they entail big fuel surcharges. However, they do have some other partners that fly to Europe, including Air Berlin and Finnair.

I’ve previously described my interest in Finnair, and even though their SFO-Helsinki flight isn’t on an A350, they still seem like a pretty fun airline to fly. I may need to go back to Europe next summer for the same trade show I was just at a couple months ago, and American showed pretty decent availability in both directions on Finnair’s seasonal SFO-HEL flight. In the past, when I’ve done random searches on this route, Finnair’s availability has been pretty bad, so I was surprised and excited to see that it was coming up as an option.

Not so fast… watch what happens when you try to select the flight. Here’s the first screen showing available saver flights on the day that I searched: 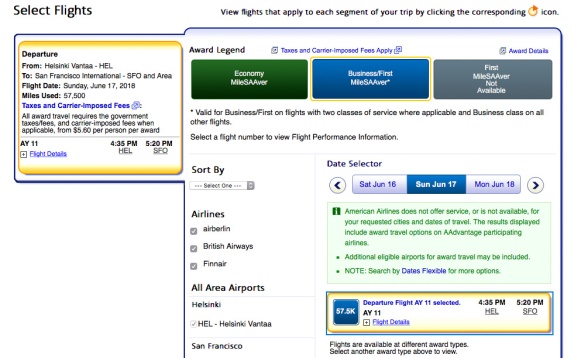 And here’s that same screen after I select the flight and hit “continue” – American tells me that the flight I wanted is no longer available, and now shows no available flights on that day.

At first, I thought someone else just happened to book that flight at the exact moment I was trying to, but I was able to get the phantom availability to show up again by running the same search in a different browser. I was also able to reproduce this error on every day in June that showed saver availability on that flight, and each time I selected the flight, it disappeared from the list of available flights for that day.

There’s nothing that pisses me off more in this game than phantom availability. It’s this kind of bullshit that gets Delta’s dishonest black box of a frequent flyer program voted #2 overall by US News & World Report, since at least you can book the awards that show up there. Between American’s dearth of availability on their own flights and their website showing unreliable results on partners, AAdvantage is teetering on the brink of uselessness for me. (I realize this is probably an isolated case, and AAdvantage is still majorly useful for many. I don’t care. I’m still mad!)

Anyone else run into this? Is it just Finnair, or has this been happening across other AAdvantage partners?