One of my earliest posts on this blog was a two-part screed about how much I hated a flight on American Airlines. I was stuck in a seat without a window due to an equipment swap, and the lack of a recession in the wall where the window would normally be made it a very uncomfortable flight. (I never knew previously how much I depend on that cutout for shoulder room.) The plane had AA’s worn-out navy blue cloth seats, and they were hot and itchy in addition to being generally uncomfortable. All in all, it was one of the most uncomfortable flights I have ever taken, and I have avoided American since then.

However, I just took a trip to Chicago this past weekend, and American had the lowest first-class fares from SFO, so I decided to try them again. After all, how bad could they be in first? At least I wouldn’t have to worry about being scrunched into a corner or something like that. Here are my impressions as an American Airlines outsider:

My flight out was on a 737-800 that had the gray leather first class seats – not super comfortable, but about on par with Delta. I was in the bulkhead row and was pleasantly surprised with the legroom. On the way back, I was on a new-looking A321 that had the same seats, although these were more comfortable and also had surprisingly large seatback screens. Honestly, if all American flights were on these A321s, I’d fly them all the time. I was really impressed with the comfort, the quality of the IFE, and the plane overall. I really do love seatback screens – it’s the same reason I like Delta’s 737-900s, even though the legroom is a little tight. It looks like the great majority of AA’s flights out of SFO are on 737s, though, and I certainly wouldn’t go out of my way to fly those (although I wouldn’t go out of my way to avoid them, either).

The one thing that really sucked, however, was that my outbound flight had one working bathroom (in the back of the plane). That meant that the aisle in the last 10 or so rows was packed with people waiting to use it for almost the entire flight. I know you can’t judge an entire airline for one shoddy plane and that this was probably just bad luck, but it was still annoying and didn’t speak very well of American’s fleet upkeep.

Okay, you’re gonna laugh – the food on both flights was great. Seriously! This comes back to my theory about how plane food should be simple and hard to fuck up above all else – I’d rather have some sort of stew with rice than a quinoa and leek salad with fricasséed watercress that sounds fancy but tastes mushy. On the flight out, I had steelcut oatmeal for breakfast, served with dried fruit and nuts and a little cup of brown sugar. It was great. I just wanted a breakfast I didn’t have to choke down, and some simple oatmeal and fixins beats just about anything else. Plus, there was a fruit plate with some decent stuff on there, and fresh too (kiwi, strawberry, blackberry, and… wait for it… raspberry). On the way back, since the flight left after 8:00PM, there was a snack service instead of dinner. I had the hummus platter (again – it’s really hard to fuck up hummus), and I even got two different types of hummus, one of which had paprika sprinkled on. The little flatbreads that came with it were nice as well. For all their reputation lately for serving disgusting swill, I came away plenty satisfied with both meals.

It’s in between the meals that AA suffers, though. On the flight out, the flight attendant passed through with a cheapo bag of snack mix, which had me wishing for a real snack basket like you’d see on Virgin or Delta. On the flight back, there was no service besides the mid-flight snack, although I’m sure I could have asked for a snack-mix packet if I really wanted one.

Service was fine on both flights, but not exceptional. The flight attendant working first class on the way back seemed to enjoy her job, but the other flight attendants on the plane had scowls the entire time. I wish they’d hand out water bottles during boarding if they aren’t going to serve drinks, but I realize flight attendants don’t get paid until the doors close, so it’s not really fair of me to expect anything. Still… United, Delta, Alaska, and Virgin all reliably provide service during boarding.

I’m including this part somewhat tongue-in-cheek, since I know that flight routing is mostly the decision of air traffic control, but check this out… There was all kinds of weather in the midwest yesterday, and I had been worried all day about having a rough flight home. It’s good for me to go through turbulence, since it helps me build up my confidence that I can do it with having a panic attack, but I still don’t look forward to it. This flight delivered on the promise, with the first 90 minutes being pretty bumpy, while some sections here and there were really bumpy. The flight attendants were strapped in the entire time, and the captain gave periodic announcements to let us know how much longer it would be before we cleared the weather. I figured it was just the reality of flying across the midwest in thunderstorm season, and I did about as well as I could do. So that’s good. But still… here’s our route, courtesy of FlightAware.com: 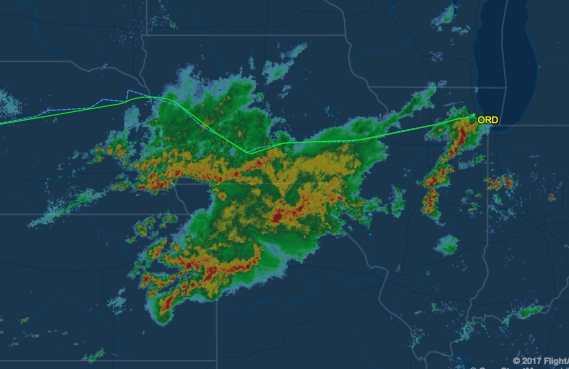 At least we didn’t have to go through much of the yellow or the red, given how bumpy just the green parts were. However, here’s the route of a United flight that left 20 minutes later: 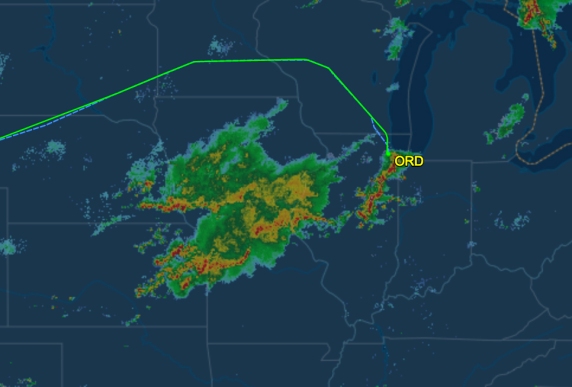 What the fuck, American??? Why do United flyers get to sail through smooth air while you drive us straight through a storm system? I guess the whole “friendly skies” thing really does mean something.

(Again, I realize that American didn’t fly through the weather just for fun and that there’s probably a good reason they didn’t go around. I’m still jealous, though, since as good of an exercise as it was to sit through over an hour of rough air, I was pretty tired and would have preferred to relax!)

I guess the takeaway is that the big three are all more or less alike when it comes to in-flight experience. In my recent experience, Delta has better service and snacks, but American has better meals (wow, there’s a sentence I thought I’d never type). United’s seats are more comfortable, but at at least on some planes, American has best-in-class IFE, while Delta’s setup on the 737-900 is pretty good as well. If you take Virgin out of the equation, I think the American A321 would my top choice for a non-transcon first class flight. I bet you don’t agree with me, and I bet you’re going to point that out in the comments.