Business class in Europe is generally horrible, since almost every airline (save for some outliers like Turkish and Aeroflot) blocks the middle seat, hands you a meal, and calls it “business class.” It makes you realize we’re kind of spoiled in the US with our reasonably priced 2×2 domestic first class, since Eurobiz is also often 4-5x the cost of an economy ticket. Of course, the average length of intra-Europe flights is so short that the lack of comfort isn’t a huge deal, and airlines like the setup because it’s super flexible. (They can increase or decrease the number of business class seats simply by moving the curtain between business and economy forward or backward.)

Because the seat is such a joke, European airlines tend to provide a better soft product, usually including lounge access and a meal that’s generally better than what you find on US airlines (although that’s debatable and depends on the US airline/route). Some airlines don’t even bother to block the middle seat, like SAS, whose SAS Plus cabin is identical to economy and only includes things like paid seat assignments, meals, lounges, and so on. SAS Plus is often cheaper than other Eurobiz products, but it goddamn well should be given that you’re going to have someone in the middle seat next to you. Or at least, you theoretically might — on my recent SAS flight, the first ten rows were dedicated to SAS Plus even though there were all of five passengers. It was super weird — rows 3 – 10 were completely vacant, and the back half of the plane was completely full. (I’m still mad at SAS due to them dicking me over with my seat assignments on that flight, so I’m in the mood to criticize them.)

On this trip, we had to get from Copenhagen to London for our flight back to California, and I was able to book the entire itinerary on British Airways. This actually saved me a ton of money, since the mileage price through Alaska was the same, and the surcharges were cut in half ($250 vs $500 per ticket) compared to if we started our itinerary in London. Given that, I wasn’t too disappointed about the shitty flight, since it’s not often that I fly routes that give me back money. Can I really talk about how it was a bad value when they basically paid me $250 to take the flight?

It wasn’t a good flight, though. It was on an A319 (which the captain called “our humble little A319” when he gave the pre-flight announcement), and the legroom was more constrained than the previous three economy flights I had taken (all of which featured the same Recaro slimline seat). The pitch was probably equivalent, but without the knee cutout in the Recaro seat, I had to be careful not to bang my knees. 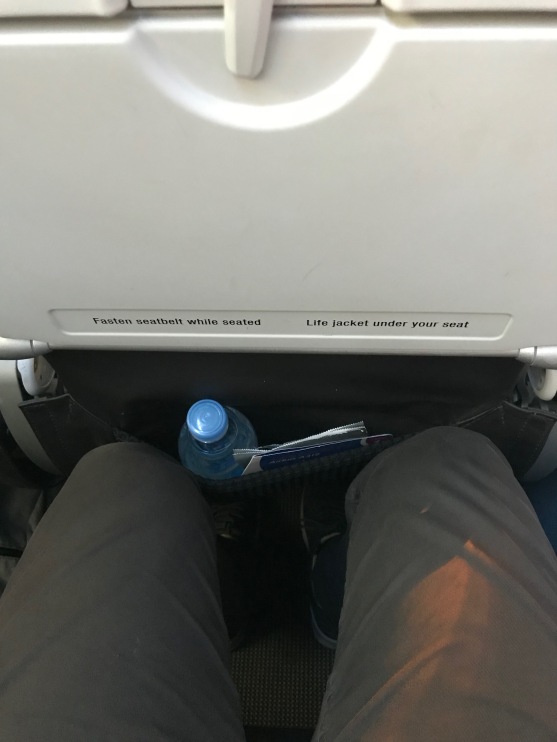 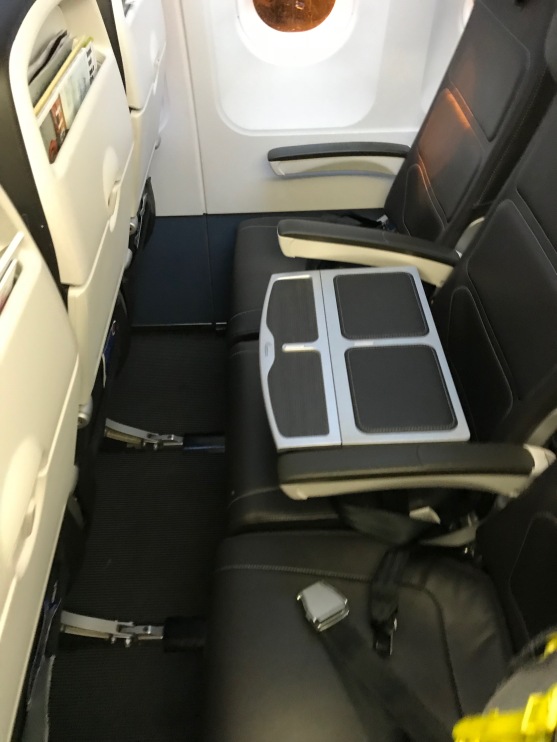 As you can see, the seat still included the middle-seat table (which isn’t long for this world), although I don’t see it as a major downgrade to get rid of it. I would have rather raised the armrest and colonized the middle seat with my ass than had a place to put my drink that didn’t require me to lower my tray table. I mentioned to Justine that people were mad about the table going away, and she said, “Why can’t they just lower the tray table on the middle seat in front of them? It sounds like people complaining for the sake of it.” Basically, if you’ve complained about the table going away, my beloved wife just put you on blast.

Due to winds, our flight time was shorter than normal, although it was a pretty smooth flight after we fought through the weather in Copenhagen. I love how the seatbelt sign goes off as soon as it smooths out on European flights, rather than staying on until the plane gets to cruise altitude. I always leave my belt fastened (as one should), but something about the sign going off lowers my flight anxiety a tad, even though it’s not uncommon for it to go back on a couple minutes later when it gets rougher than the crew anticipated.

The two other benefits to Club Europe were the meal and the Fast Track invitation for immigration. I totally forgot about this latter benefit, but it ended up saving us tons of time, since the lines at immigration in London were really long. Plus, our baggage came out first, so we were on our way to the hotel while economy passengers were still in line at immigration. 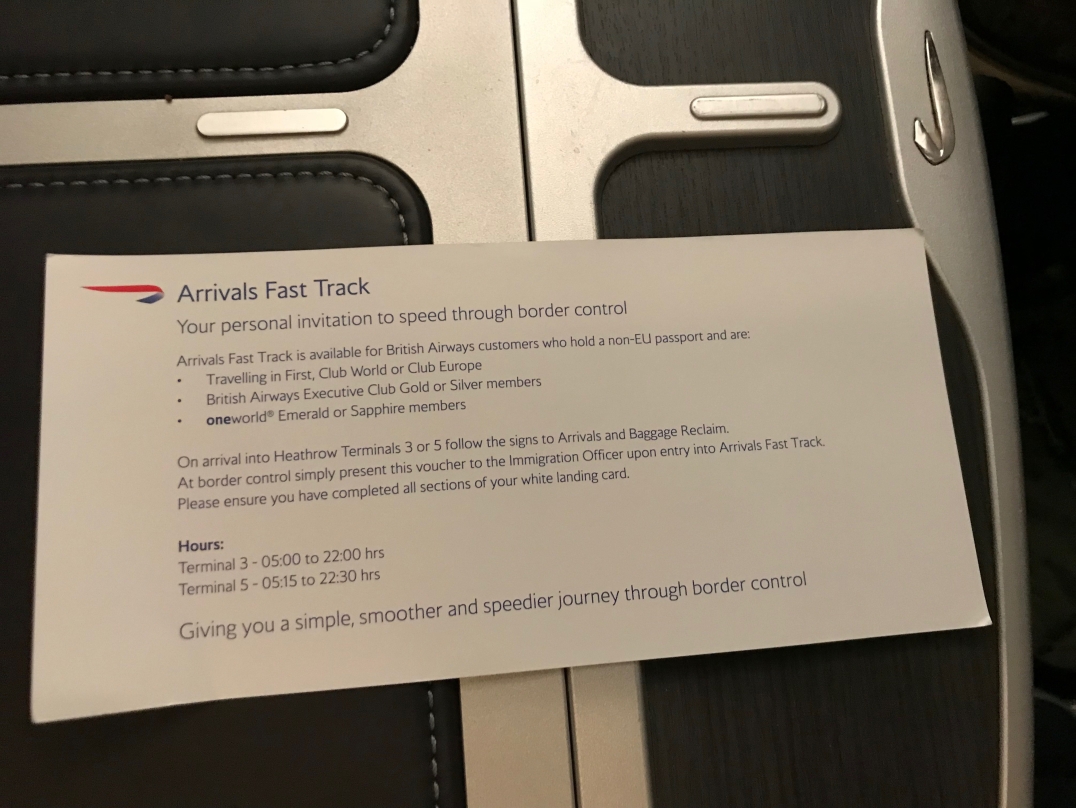 The meal was actually pretty good, not that I had much of a need to be fed on a 90-minute flight. But I appreciate the trio of hummus-ish spreads, and if I didn’t hate olives, I would have happily cleared my plate. The flight attendants were pretty nice too, come to think of it. 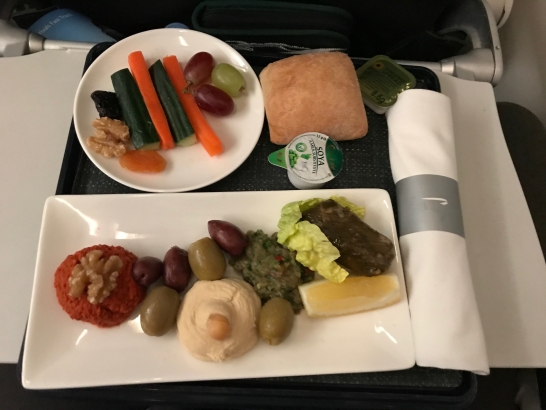 So here’s a hypothetical question: which would you prefer in my situation? To refresh your memory, I had a 4 1/2 hour layover in Copenhagen (since I didn’t want to cut it close and take a chance on the Faroese weather) before my BA flight, which was under two hours. Would you have preferred United’s domestic first class, keeping in mind that United wouldn’t have given you lounge access or food on board?

It’s mostly made moot by the fact that Priority Pass offers a number of lounge options at CPH, including the Eventyr lounge, which is what BA uses. However, the reason I ask the question is that I like to think about the end-to-end travel experience that an airline offers, and for a flight this short and a layover this long, I feel like I might even prefer the Euro option (again assuming a scenario in which I wouldn’t have had access to the Eventyr lounge given the US option).

Mostly I just find it interesting that European airlines conceptualize the business class experience differently, focusing more on efficiency and comfort at the airport than on the planes themselves. Eurobiz is obviously shitty, though, so I guess the pre-flight perks are probably just a way to do some handwaving around the terrible on-board product.

Finally, all the complaining in the world doesn’t really matter, since Eurobiz is a necessary evil unless you want to route through Moscow or Istanbul (which I don’t). I wish BA offered comparatively more comfort, since their flights tend to be a little longer than other European carriers, but I should know by now not to wish for much from BA. I mean, they did offer more comfort in the past with their weird winch seats that could be adjusted to squeeze the middle seat (making the aisle and window seats wider in the process), but they got rid of those in favor of the current product.

Clearly there’s no one out there who likes Eurobiz, but am I grasping at straws trying to find positives about it, or have you had positive experiences with certain products (or certain aspects of certain products) too?

4 thoughts on “I flew British Airways Club Europe, and yeah it sucked, but when your expectations are that low…”