I was fortunate enough to spend a couple hours in United’s brand new SFO Polaris lounge today during their soft open, and it was really great. I should point out that I paid for this privilege (with 2500 miles) and wasn’t compensated in any way by United. I’m actually pretty surprised it was so cheap — when I read a tweet about United offering access in two-hour slots, I figured it would be ungodly expensive, or that it would have sold out in minutes. I had just woken up when I found out about the offer, and I bought my ticket immediately. That ended up being a good call, since most of the slots were taken by the time I was ready to leave for work.

In the coming days, you’re going to see a slew of posts that have exhaustive, professional-quality photos of every nook and cranny of the lounge, so my focus is less on documenting each individual chair and floor tile and more about giving my general impression after spending a couple hours there. I didn’t have a flight to catch (United provided me a gate pass to get through security), so I was able to relax and take in the lounge on its own terms. (Check out this post from Live and Let’s Fly for more photos.) 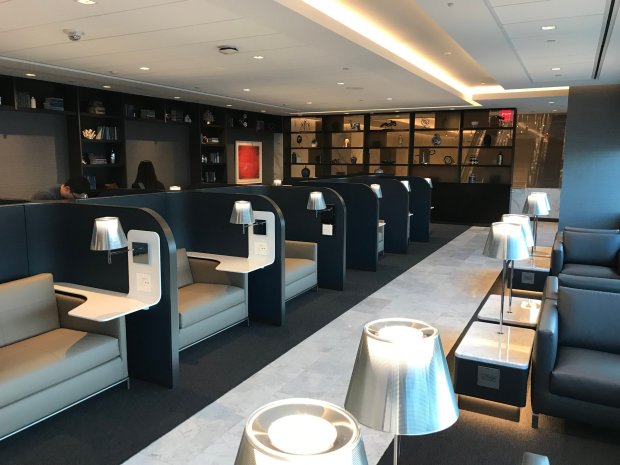 Walking into the lounge, you’re greeted by a quarry’s worth of white marble, which is to be expected from the Polaris visual design. Overall, one of the things I like about Polaris is how it offers a consistent visual identity that extends from the lounge to the plane, the amenity kit, the food presentation, and so on. This is something I find missing from Delta and American’s premium products. American’s Flagship First lounges look fantastic, but aside from some gray and red, nothing about it screams “American Airlines,” and that continues onboard their planes, where gray, beige, and black vie for attention, depending on what configuration you get. I know I’m more interested in visual identity than most people, so I’m sure a lot of folks couldn’t care less whether United’s lounge reflects the overall brand presentation or not, as long as it’s a nice space. And it is, so don’t worry.

The lounge is long and narrow, with two levels that snake along the edge of SFO’s international terminal. The shape means that there’s a mostly unbroken panorama of the airport, including a great view of the widebody aircraft lined up at the international terminal’s G gates. If you’ll excuse the bird shit on the window, here’s a good example of what you’ll see from the sitting area on the upper level. 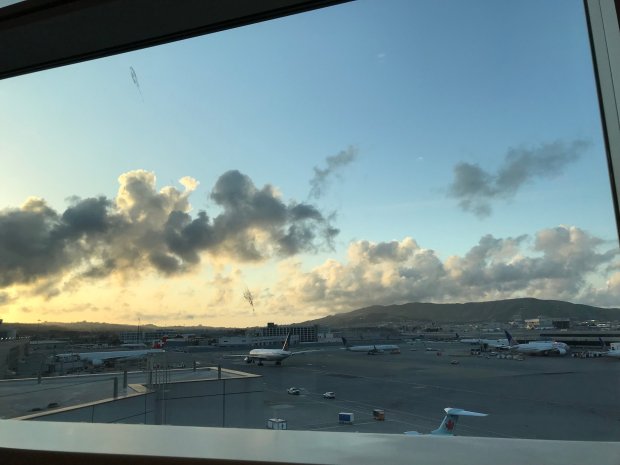 My other initial impression was that the space is gigantic. I don’t think I’ve ever been to a lounge this big before — stick a duty free store in there and it would feel like its own terminal. You can spend a good five minutes just walking from end-to-end on each floor. When it’s up and running, it’s going to have to serve a ton of passengers, so hopefully its enormity will help keep it from becoming overcrowded. That was certainly a problem at the Chicago Polaris lounge, which at one point had a line of people near the entrance just waiting for a seat to open up.

There are tons of different seating options, although my favorite remains the cubicle chairs. They have these in Chicago too, although if memory serves me, the Chicago ones are narrower. In fact, if you are small and you have a buddy who’s also small, and you and your buddy like each other a lot, you’ll both probably be able to fit. There’s one particular seat that faces the window, which makes it my favorite seat in the lounge. (The odds of this seat being open on any future visit are probably pretty small, though, so I tried to get my money’s worth tonight.) 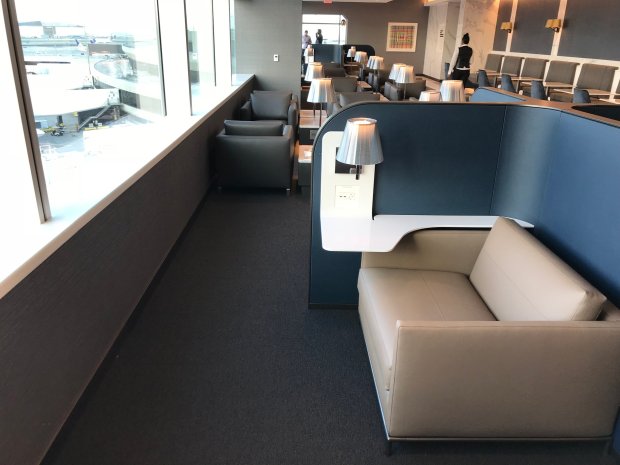 Here are some other seats: 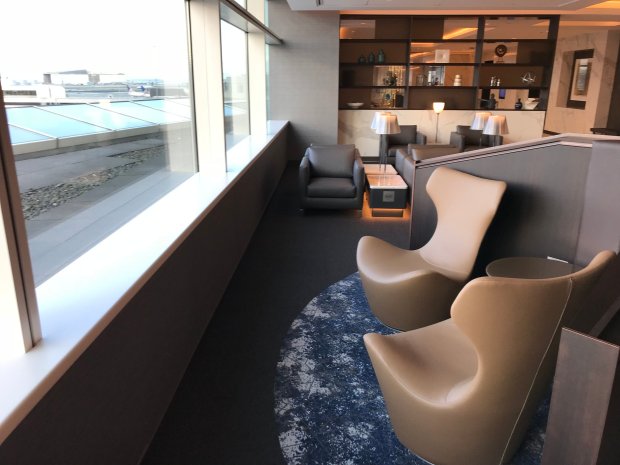 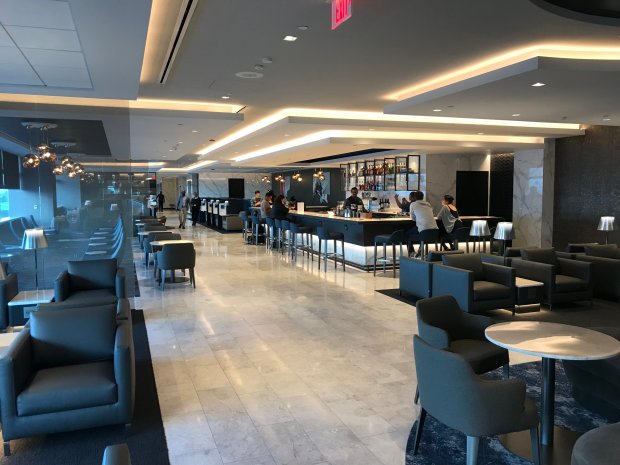 I was starving when 6:00 rolled around and it was my turn to enter the lounge, so I made a bee-line for the dining room. Here’s the sign United has outside the dining room, which I guess is technically true, in that American only offers sit-down dining for first class passengers. 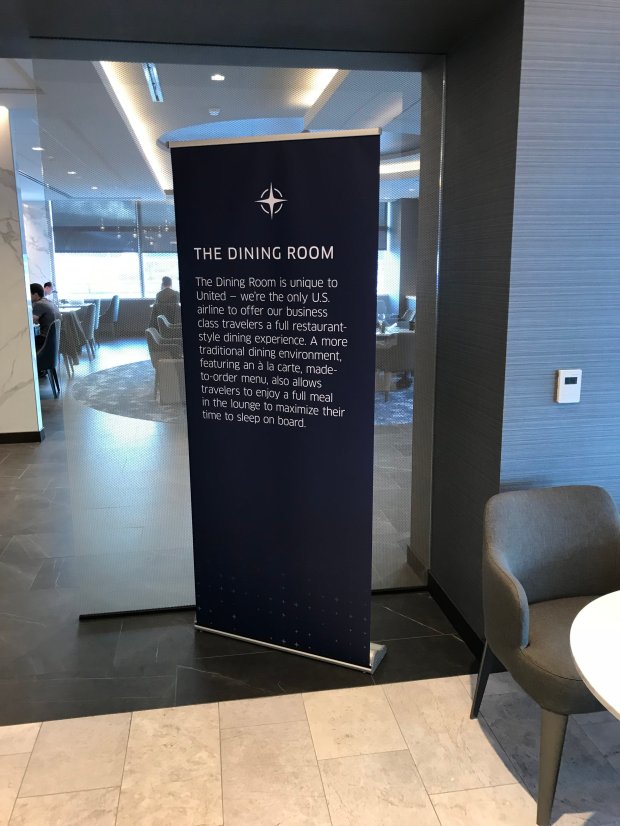 While it’s great that United offers this service, the wait to sit down once the lounge opens for real is going to be nuts. I counted forty seats in the dining room, so if the lounge is operating at capacity, that means that less than 10% of the guests at any given time will be able to eat. 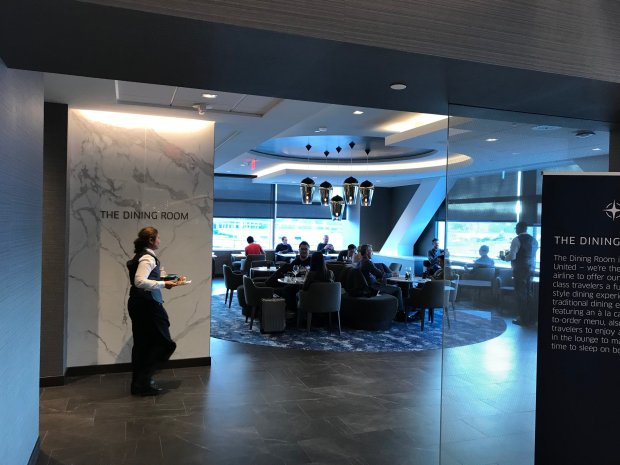 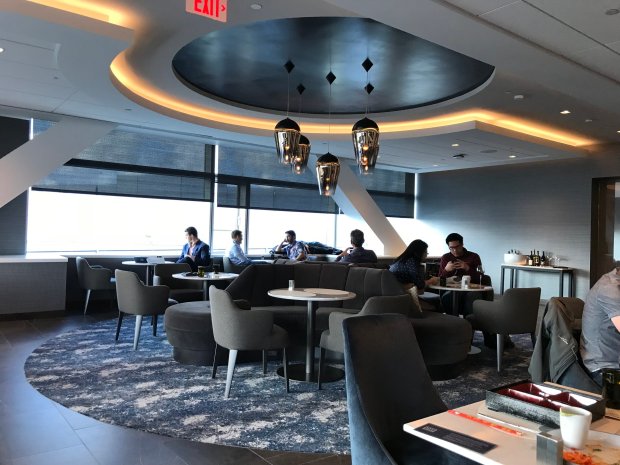 I ordered the pasta, and it was really high-quality. It’s not the best meal I’ve ever had, but I was impressed with the presentation, and the portion size was good given that it was pretty rich. 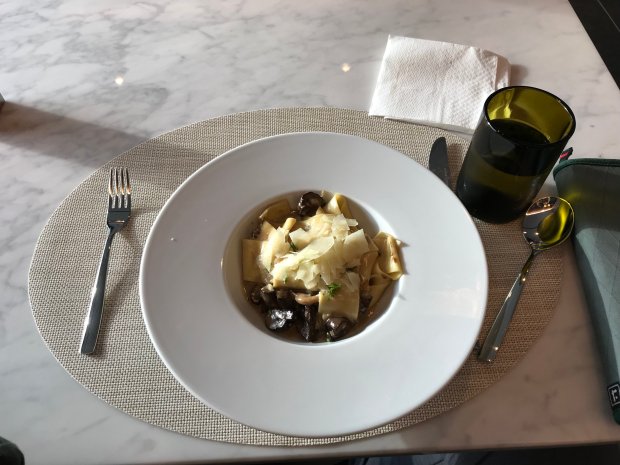 It was clear that there are still some kinks to work out with the service, but that’s the point of doing a soft launch. Nothing major, it just seemed a little disorganized, and it took a while for my meal to come out (this is with around 15 people in the dining room). I’m sure they’ll hit a groove relatively quickly, at which point this will be a really nice pre-flight dining option for anyone who can get a table.

I didn’t stick around for dessert, because I wanted to sample some of the other food. If you think that I didn’t leave the dining room and immediately hit up the ramen station, then you obviously don’t know me very well. The ramen was okay, but it didn’t compare to the quality of food in the dining room.

There’s also a buffet of finger foods (as well as a very excellent offering of sweets), which I skipped. It looked pretty decent, but I have to say that the tapas that they serve in the Chicago lounge were better. There were more diverse options, more on par with something you’d order at a sit-down restaurant, whereas this buffet was more geared toward basic carb-y stuff. (The pasta salad looked pretty tempting, though, I’ll admit.)

And let’s not forget the bar, of course. I didn’t get a good photo of it (FOR SHAME!), but you can see it in one of the above photos of the seating. They’ve got some top shelf stuff there, too. I had a Balvenie 12 year scotch and a Whistle Pig straight rye, and any time I get two high-end whiskies without paying extra, I’m gonna be pretty happy.

This is where the lounge shines, although again, I hope the eventual number of passengers doesn’t make it too tough to snag nap rooms or showers.

In the middle of the second level, there’s a bank of glass-walled offices, which are very generously sized. In fact, they probably could have installed twice as many without them feeling cramped. 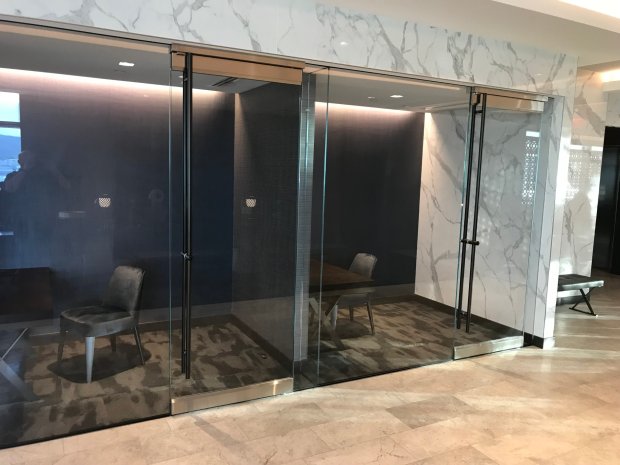 Then on the first floor, past the “library” sitting area (pictured at the top of this post), you get to the spa area, where the nap rooms and showers are located. I guess it’s not really a spa, but it’s behind a set of glass doors and you check in a desk where they keep the towels, so it’s at least spa-adjacent.

The nap rooms are okay, but they’re not all that conducive to sleeping. The day bed is pretty hard, and the back curves up so much that you can’t really make too much use of the pillow there. Plus, there are no blinds on the windows of each room (or doors for that matter), so you can’t entirely shut out the world around you. The noise machine is a nice touch, though. If I had a long layover after a long flight, I’d much rather spend it in one of these rooms than out in the main part of the lounge, so they do serve a purpose. 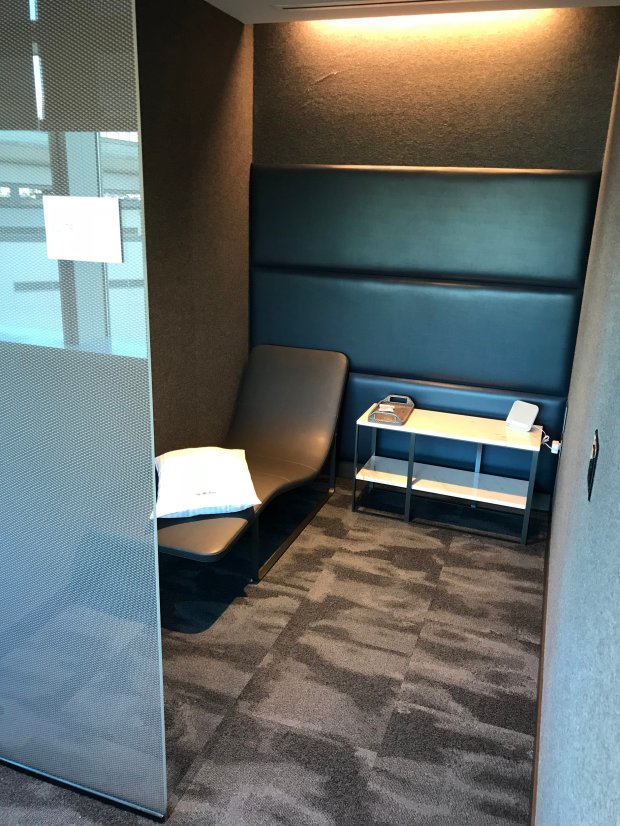 Then there are the shower rooms. If you thought that I wasn’t going to take a shower just for the hell of it, then you obviously don’t know me very well. I knew from the Chicago lounge that the shower would be excellent, and it didn’t disappoint. There is a rainforest shower head as well as a standard angled one, and each shower head has two modes, so you have a total of eight possible shower configurations. A+ all around. (I should also mention that the bath mat is totally sublime. I don’t think I’ve ever cared about a bath mat before, but the one in the shower room was as soft and fluffy as a cloud, but not just any cloud… a cloud that was also filled with memory foam.)

There’s a full-length mirror on the door, so I took an obligatory selfie. However, I should note that you can see the mirror from inside the shower, so if you’re a normal person who’s disgusted by the sight of your own nude body, just remember to keep your eyes forward. 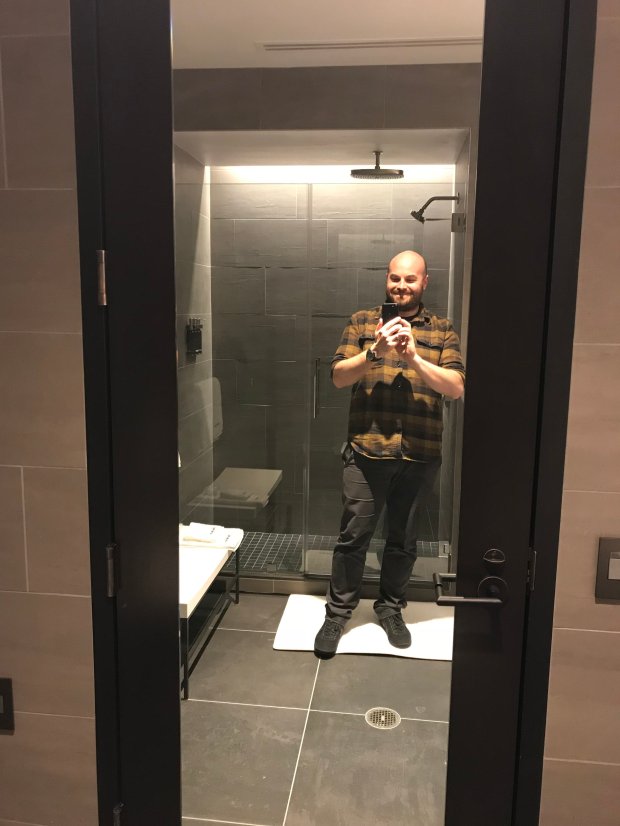 The last feature of the lounge is something called “The Studio,” which is on the opposite end of the second level as the dining room. I don’t really know what this is for — I think I overheard someone saying it would be a noodle bar, but it didn’t really look set up for cooking. It’s an attractive space, though, so whatever it is, I’m sure it will be a worthwhile addition. 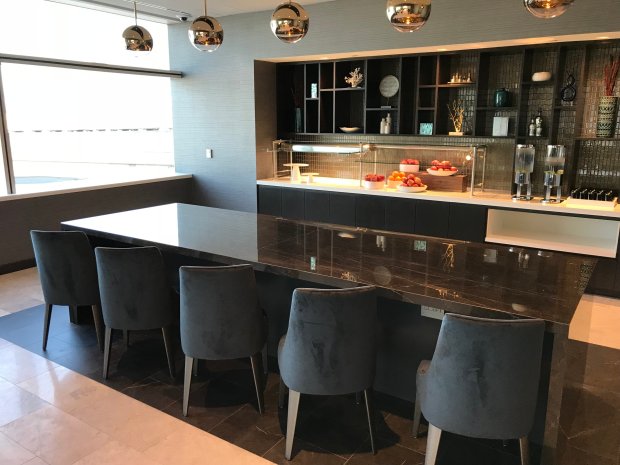 I didn’t take a photo of the bathrooms, although you can probably imagine them. They basically look like the shower rooms only without a shower. Each bathroom is its own self-contained room, which I love. Plus, unlike the Chicago lounge, the bathrooms are spaced out in banks of four or five throughout the lounge, rather than all being laid out along one hallway. This makes it less awkward to hunt for an unoccupied stall, and it also provides more space to wait for one to open up.

I do wish that United had provided a better means of determining whether a stall is occupied, since it’s really hard to read the word “occupied” on the door. It’s under the lock, and the dark lighting makes it almost invisible. I know I’d feel like a real weirdo putting my face right up the handle on every bathroom trying to find one to use. 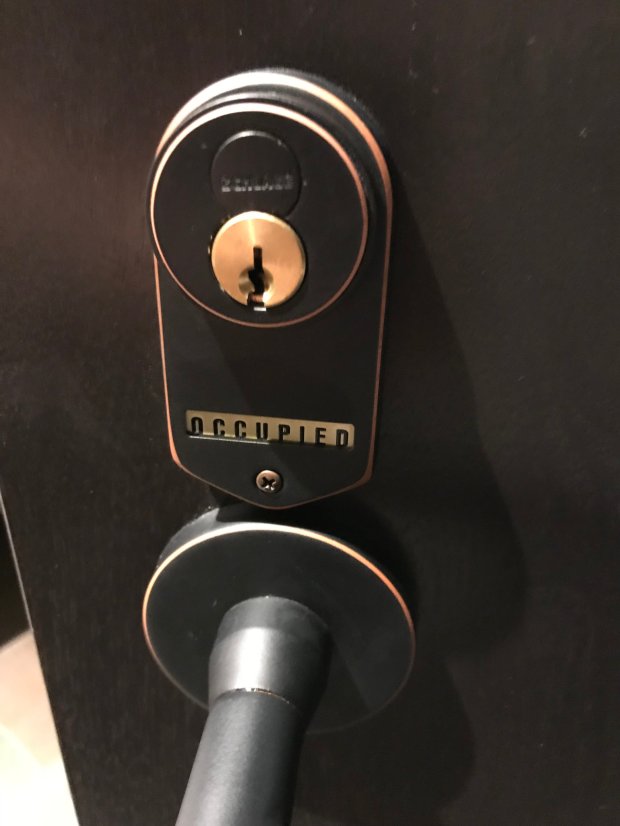 Okay, that’s all I’ve got. Overall, I loved it, and I’m super excited to go back this fall before my flight to Zurich on Swiss. If it weren’t for the terrace of the Concorde lounge in London, I’d say this is my favorite lounge that I’ve been to so far. I loved that terrace, though.

There’s no denying that the Polaris lounge is a fantastic addition to SFO. While SFO is a nice airport, it isn’t exactly known for its lounges, although that’s going to change now. I haven’t been to the murderer’s row of “best lounges in the US,” but I can’t believe this wouldn’t rank high on that list. I think it might even siphon some traffic away from the Centurion lounge, since I know a lot of Star Alliance premium passengers use that lounge instead of the mediocre United Club and Global First lounge.

Did anyone else go to the preview today? Do you have any plans to check out the lounge in the near future? You’re in for a treat if so.