This post started out as another long diatribe about booking travel to the Faroe Islands, and yes, I realize that this blog probably doesn’t need another one of those. However, over the course of writing it, I realized that it’s actually about what does and does not constitute a layover under United’s newish routing rules. (For a summary of these rules, including United’s execrably named “Excursionist Perk,” just google it and you’ll find a million articles.) Let me back up. I was trying to search for awards from SFO to FAE via CPH, but United wouldn’t find anything with only one stop. Instead, I kept getting this happy little error:

After clearing the filters, I instead got some really super 2-stop itineraries like this one:

Even though SAS has saver availability on the SFO-CPH flight on March 31st, United still wouldn’t pull it up as an option and instead kept forcing me onto other transatlantic legs with a connection that put me in CPH late at night. Luckily, Aeroplan was willing to cooperate… although it still left open the question of why the itinerary shows up on one site but not the other.

It turns out that the issue has to do with timing… Since the CPH-FAE leg isn’t until 11:00AM the next day, the layover straddles the stopover rules of Aeroplan and United. Anything under 24 hours counts as a layover for Aeroplan, whereas for United it’s less clear.

Back when United actually had a stopover policy, they used the same 24-hour rule. In their FAQ on the matter, they specifically say that the new “Excursionist Perk” policy is not defined by time, which I guess means that United can seemingly arbitrarily decide when a connecting flight becomes an Excursionist Perk flight.

This theory was borne out when I tried to book the itinerary I wanted using United’s mutli-city award tool. I started by searching for SFO-CPH and CPH-FAE as separate legs, and United wanted to tack on 15,000 miles to book the connecting flight: 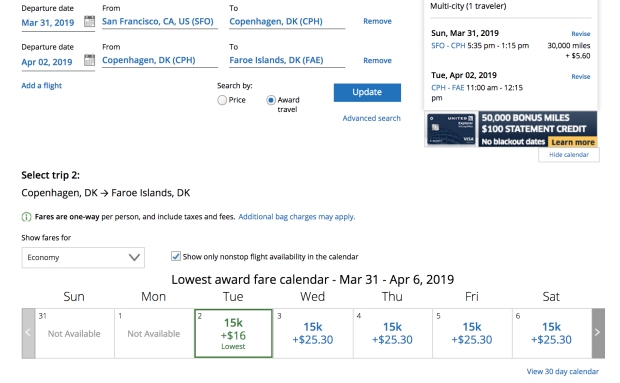 Remember that the Excursionist Perk only applies on round-trip itineraries that start and end in the same region, so when I added a flight back to San Francisco onto my original search, that CPH-FAE flight became an Excursionist Perk and priced out at zero miles. 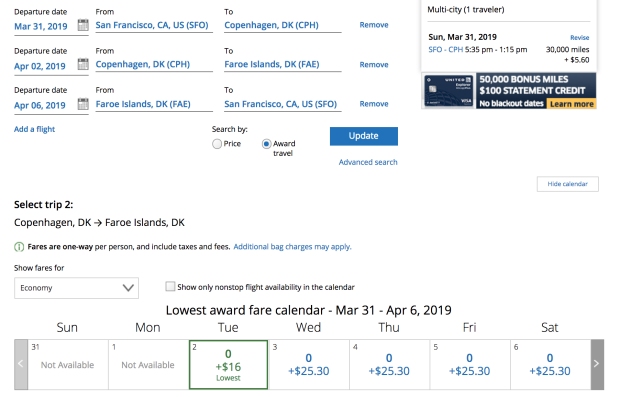 This may already be common knowledge, but I wasn’t able to find anything about United’s maximum layover time in any of the articles about the new routing rules. If you think about it, the claim that the Excursionist Perk isn’t defined by time doesn’t really make sense, since there has to be some cutoff after which United no longer considers a flight to be a connection and instead treats it as an Excursionist Perk. (Typing “Excursionist Perk” over and over again while writing this post has only reinforced how much I hate that goddamn name.)

I tried to find out from United whether the whole “not defined by time” thing was true, and it definitely isn’t. In fact, here’s what they told me: 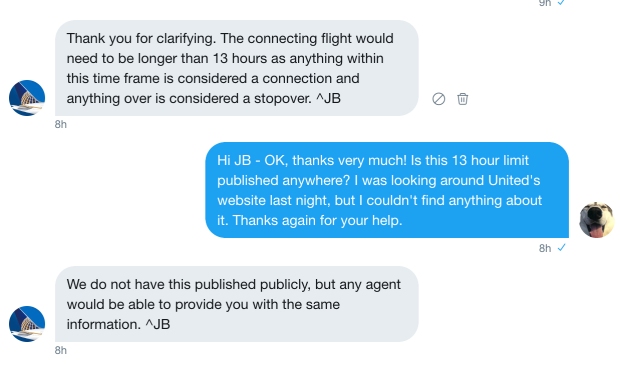 13 hours?!?! That’s pretty restrictive, especially since a lot of flights to Europe from the west coast leave in the evening and arrive in the early afternoon. In this case, if you were continuing on to a destination that only had a couple flights a day, there’s a really good chance you’d need to wait overnight for the connecting flight. Spending 10 hours at an airport hotel hardly counts as a stopover, though, so I’m definitely not a fan of this new policy. And it is a stopover policy, by the way. United may like to say that the Excursionist Perk replaces stopovers, but all that really means is that they changed the name in order to avoid publishing the details of a much more restrictive and customer-unfriendly policy.

In the end, this is annoying because it restricts the best itinerary in the case of my Faroe Islands search to round-trip awards. Given how stingy SAS can be with premium cabin space, it’s probably not realistic to find business class seats in both directions on days that will work for my trip, so my only option in this case would be to book with Aeroplan instead. Also, I just want to point out again how ridiculous it is that United won’t let you book a one-way award with a 13 hour layover.

Does anyone care about this? I’m always hesitant to post about stuff I discovered, since I’m never confident that I’m the first person to discover it… although I feel like it’s worth posting anyway, since I’m also probably not the only person who doesn’t know about it either. THIRTEEN HOURS?!?!?