Up top: if you have already decided to get the Hilton Aspire or Hilton Ascend cards, using my links to get me some extra points is mega appreciated.

Back in April, I paid around $900 for a plate of breakfast potatoes that, thanks to my Diamond status, came with three free nights accommodation at the Hilton Conrad Hotel in Chicago. The hotel was fine (I’ll talk a little more about it in a sec), but the breakfast potatoes were fucking amazing. I’m a pretty big fan of breakfast potatoes as it is, but I had never had them presented as FRIED CUBES before. 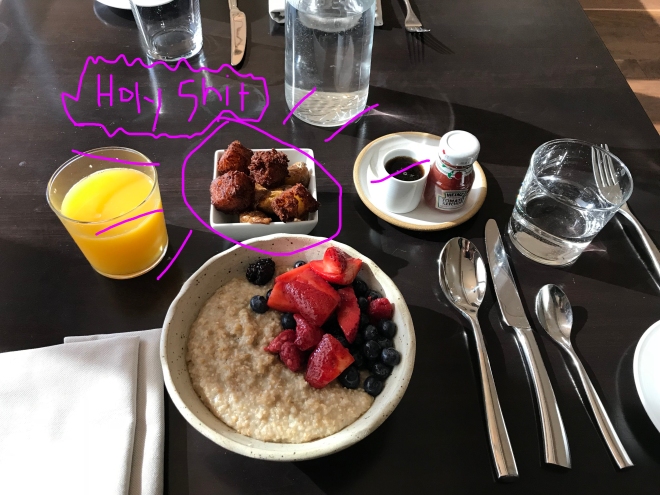 They weren’t quite hash browns, since the outside of each cube was also somehow made up of shredded potatoes, only adding to the potatoey bliss. I don’t know how they did it, but I’m staying at the hotel next year just to get more of them. They more the outweighed any negatives from the hotel stay itself. And I know $900 is a lot to pay for some fried potato cubes, but when you factor in the cost of the free room for the weekend, it ends up not being that bad.

This was also my second Hilton stay in which I’m not really sure I got any incremental benefit from Diamond status (aside from higher points earning). I would have gotten free breakfast with Gold status, and the guy at check-in specifically told me that they weren’t offering elite upgrades. I made some comment about them being full up, and he said they weren’t full, they just weren’t offering elite upgrades. Since I’m going back next year for more potatoes, I’ll take another whack at the upgrade tree, but maybe keep that it mind if you’re booking a base room and hoping for something better. The guy actually offered me a paid upgrade to a room overlooking Michigan Avenue for like $70 per night, which also seemed kind of weird, since I thought Diamond status got you upgraded to a better room automatically.

Oh well, it wasn’t a huge deal since I grew up in Chicago and don’t really care about Michigan Avenue. Plus, I was by myself, so I didn’t need any extra space. And, the base room is plenty nice anyway. It’s not a huge room, but the bed is really comfortable, and the little couch by the window is a nice place to sit and get some work done. The expansive bathroom is great as well, with a separate toilet closet and a powerful shower. Toiletries are branded “Shanghai Tang” which sounds like the name of a racist stereotype movie character from the 1940s. Shanghai Tang and the Legend of the Jade Monkey.

Here are some photos of the room, in a handy slide show. Because of the layout, this is another room that’s hard to photograph, but it basically matches the stock photos on Hilton’s website, so just go there instead.

It’s pretty luxurious – they definitely check all the boxes you’d be looking for in a five star hotel. I’m reasonably excited to stay there again, to be honest… comparing it to the nearby London House (Curio), I’d probably give the edge to the Conrad, for a few reasons:

Here are some photos of the two-story lobby. This is one of those hotels where the lobby is on the top floor, so you get some great views off the bat. There are even a couple outdoor terraces.

And here are some more photos of the Potato Sanctuary, AKA the restaurant where you get your free breakfast.

Last thing to note: the WiFi was totally non-functional. I was able to connect all my devices, but none of them could access the internet. Maybe this was user error, but I’ve never had this issue at any other hotel before. Given that premium WiFi is another elite benefit, this is another area where the Conrad totally whiffed on providing elite benefits. It didn’t ruin my stay or anything, but I ended up burning through way more data than I normally would as a result.

Overall, I think this idea of a potato restaurant also functioning as a hotel is a novel one, and I hope Hilton implements it at more properties. Just tighten up the elite recognition and I’d give it a ten out of ten. Anyone else eat these potatoes and have the same feelings about the attached hotel?