The answer is that it doesn’t matter, since this trend of airlines massively upping their lounge game is great and it’s not like you’re ever going to have to choose between American’s Flagship Lounge JFK and United Polaris SFO. Also, I’m highly unqualified to weigh in on the best lounge in the US, having not been to a single lounge outside of a handful of airports. So take my verdict with a grain of salt, and then pour that salt in Delta’s eye for letting themselves be eclipsed by United and American. The unquestioned leader among the Big 3 is trying to pull this whole “We don’t need special lounges since our Sky Clubs are so nice to begin with” thing, and it reminds me of Akbar Al-Baker saying that Qatar Airways doesn’t need premium economy because their economy seats are so nice. Delta does have some extremely nice lounges in their network, especially the Sky Clubs in Seattle and San Francisco… however, they still don’t hold a candle to what American and United are doing on the premium end of things. 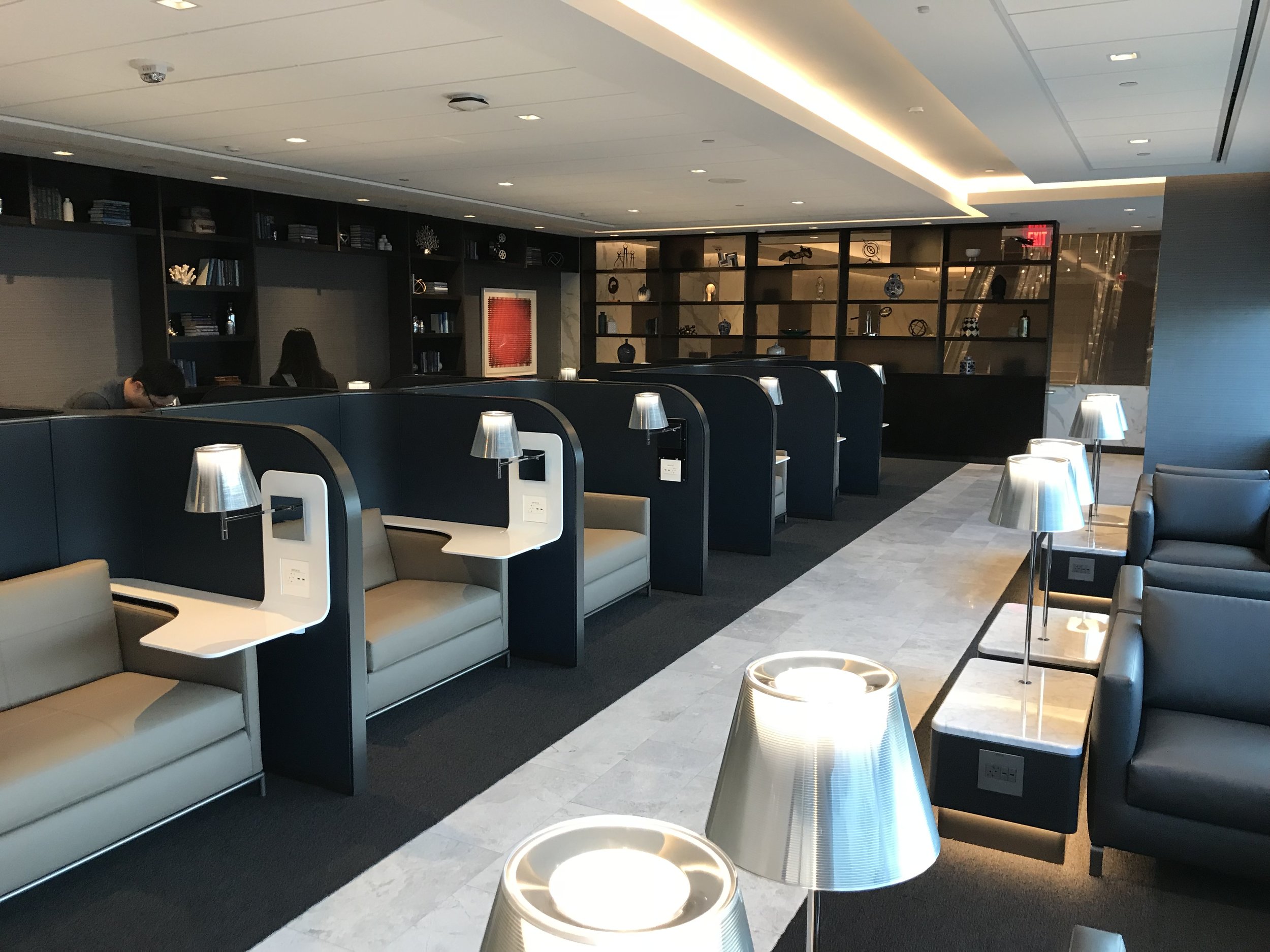 Because I’m stupid, I didn’t take any photos of American’s flagship lounge while I was there, but you can see photos all over the web if you look. Here’s a photo from American’s website:

Before I go into why I prefer United, both lounges are pretty competitive in terms of amenities. They both offer a wide range of seating, runway views, premium alcohol, a nice buffet and plenty of snacks, showers, and sit-down dining. They’re also both very elegant, upscale spaces that clearly feel a cut above standard airline clubs (even Delta Sky Clubs).

But as I mentioned, I still give United the edge, for the following reasons. (Keep in mind I’m specifically comparing Flagship JFK and Polaris SFO.)

#1: Design. I’ve mentioned this before, but I pay a lot of attention to airline visual design, and I really like how United has created an entire design concept around Polaris and then used that concept to inform the design of everything from the lounge to the cabin to the amenity kit, bedding, and so on. It elevates the premium experience and shows an attention to detail that American and Delta lack in their own visual identities. The Flagship lounge is definitely nice, but nothing about it says “American Airlines” to me. There’s wood paneling and red accents in the lounge, but then the cabin is dark gray and dark blue, and the amenity kit is black and green. I realize it doesn’t make a material difference in how nice the lounge is, but anyone who cares about premium travel values being in a beautifully designed space (even if they don’t admit it), and Polaris is the clear winner here.

#2: Space. When I took my fancy tour of the Polaris lounge, my concern was that it wouldn’t seem so nice once it was packed to the gills with people and you had to wait an hour to shower or dine in the restaurant. Well, I’m happy to report that after visiting the lounge before a recent flight, it was still almost completely empty. It’s simply massive, and it looks like they’ve addressed the overcrowding issues I experienced at the Polaris lounge in Chicago. The Flagship lounge is smaller and felt much more crowded, and there were more people using the sit-down dining, despite it being limited only to first-class passengers. I imagine this is due to American’s less restrictive access policy, but it does take away from the overall enjoyment of the lounge.

#3: Facilities. The Flagship lounge doesn’t have enough bathrooms, and they’re communal rather than the individual stalls in the Polaris lounge. I went in to take a #2 before my flight and all the stalls were occupied, so I ended up using the shower instead. Well to be clear, I used a toilet in one of the shower stalls, not the shower itself. I’m not a monster. Speaking of the shower stalls, the Polaris showers are way nicer, as you can see in the following selfie: 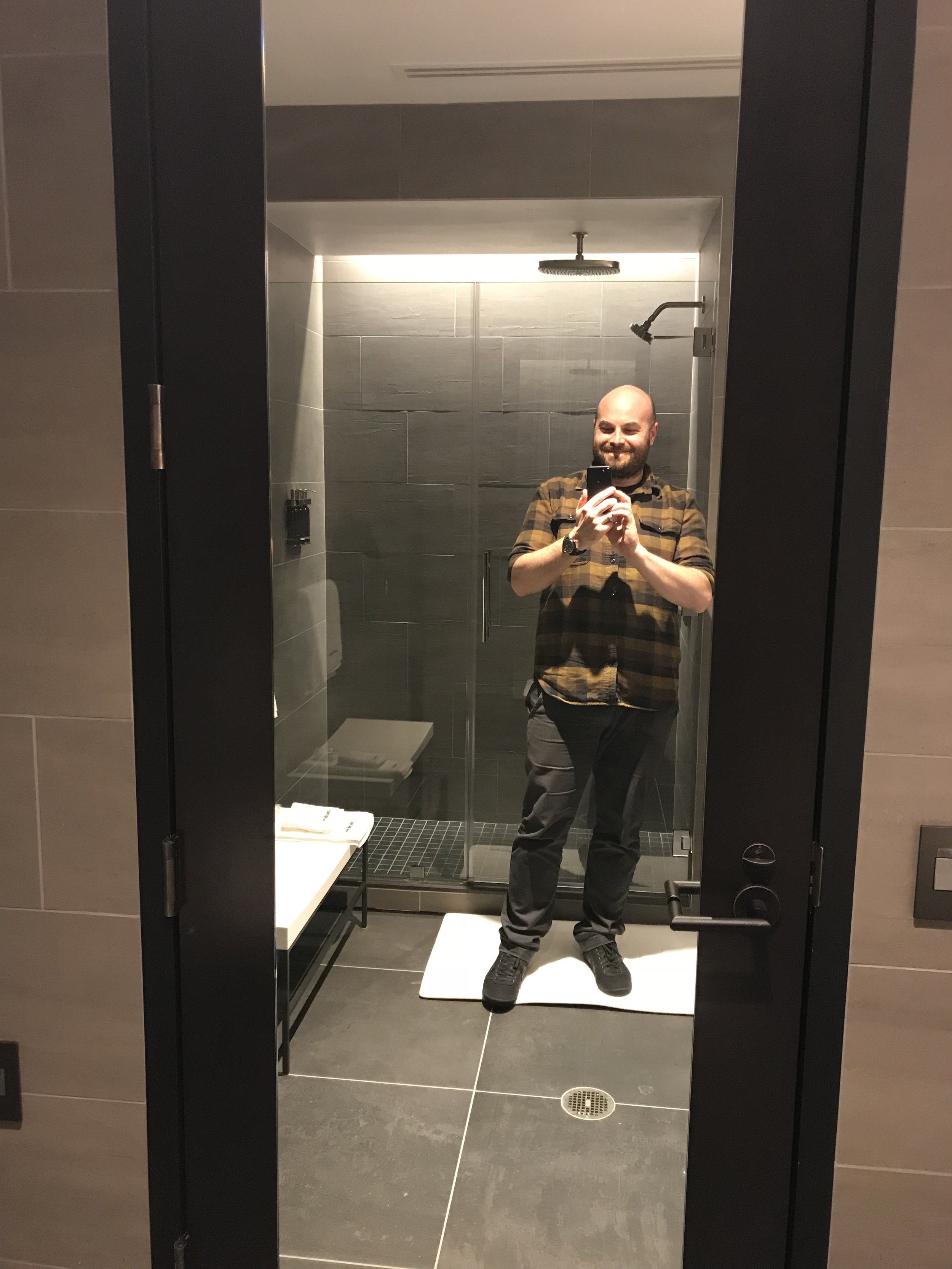 #4: Fixtures. Although I had a nice time in both lounges, the Polaris lounge offers a nicer variety of seating options, including those really great cubicle seats. There are also nap rooms if you’re tired. 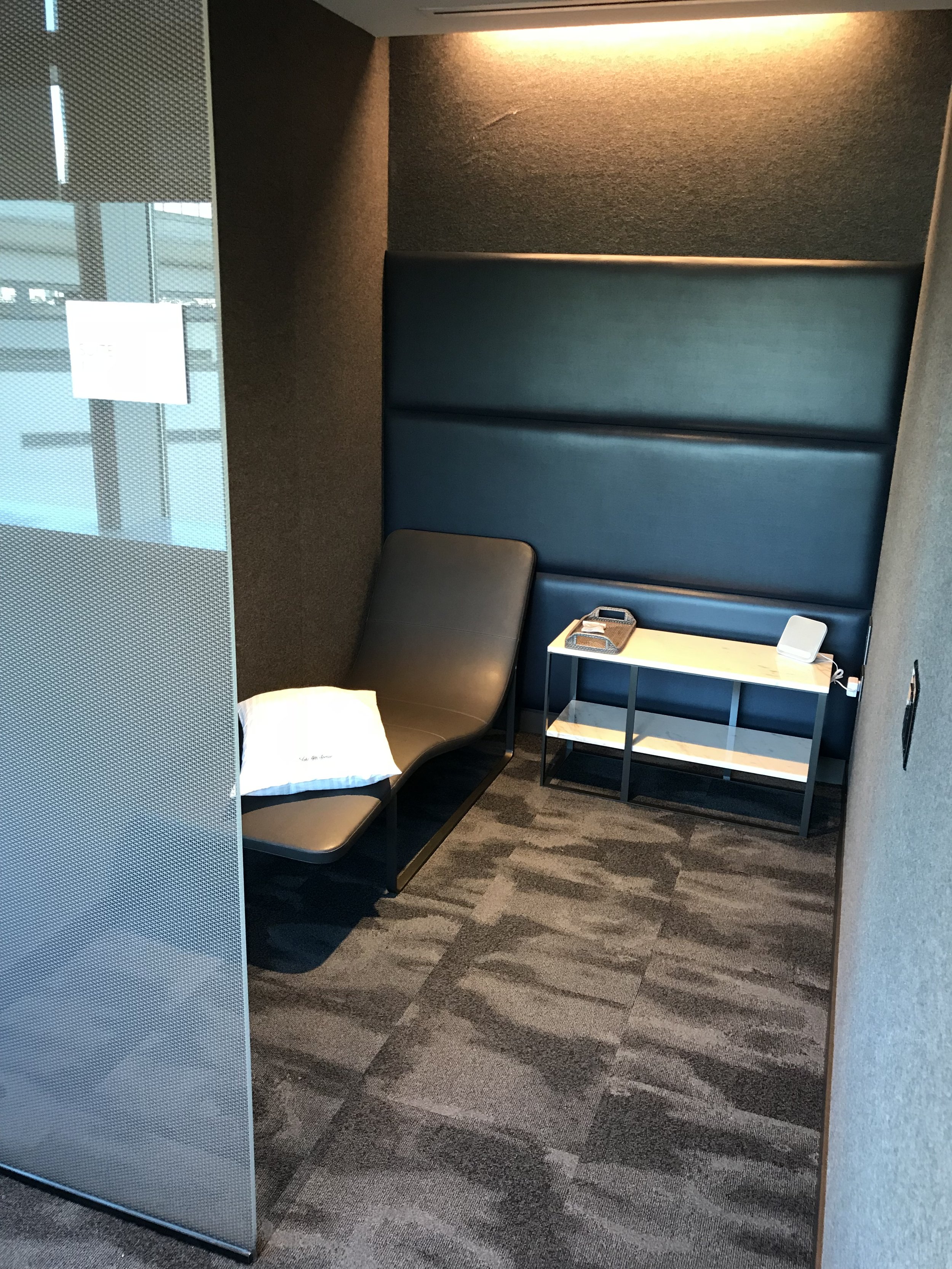 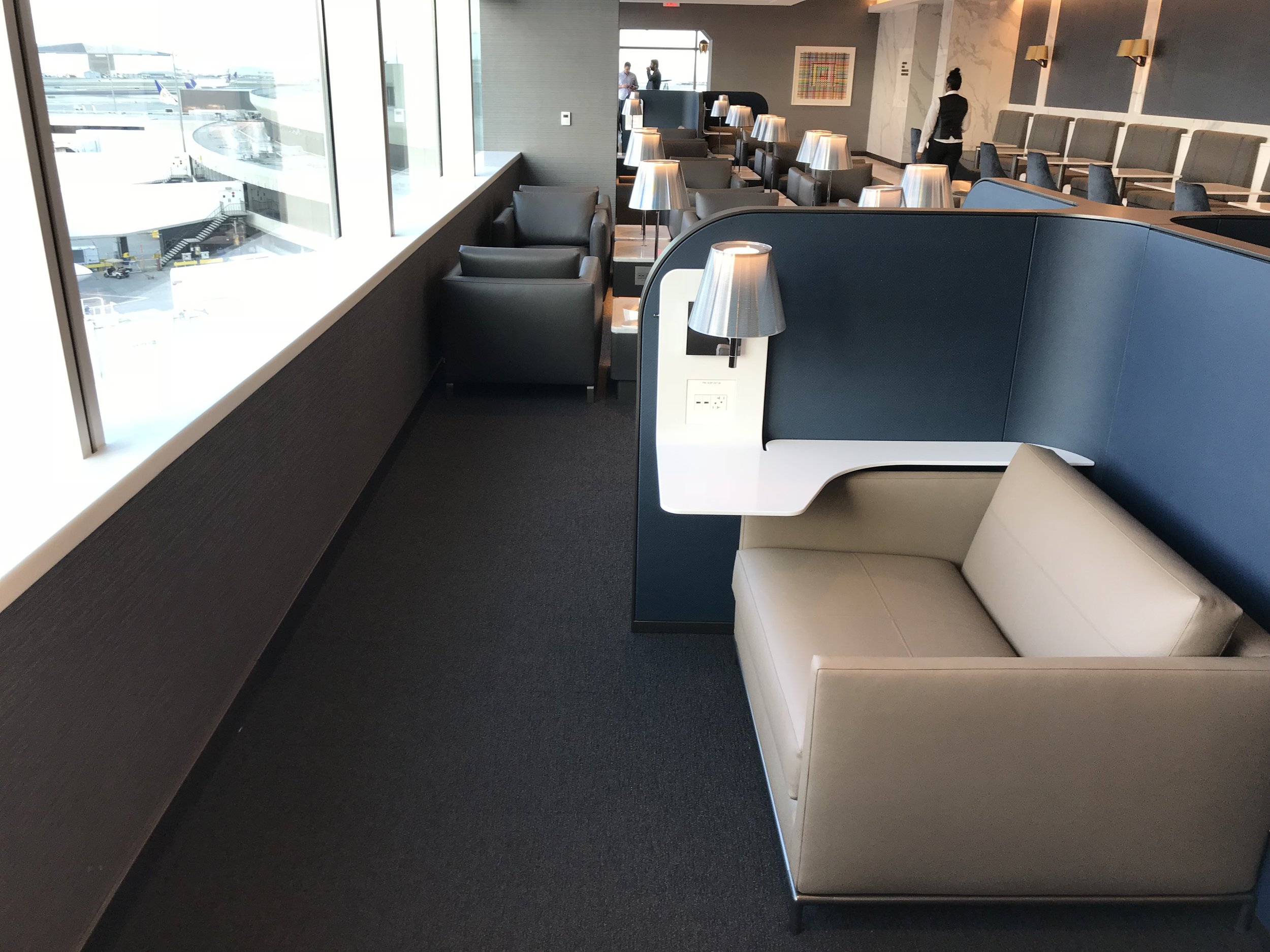 In terms of the food quality, I’d say that both lounges are about equal both at the buffet and in the restaurant. However, given how few planes American operates with 3-cabin first class, only a handful of people can actually take advantage of both dining options. On the flipside, the Polaris lounge opens the sit-down dining room to everyone, rather than just first class passengers, which is a really nice benefit.

The only area where I prefer American to United is the check-in process, which I’d at least consider to be lounge-adjacent. While I didn’t love Flagship check-in, it theoretically should save time and provide a more exclusive experience when functioning correctly. (In my case, my wife didn’t have Pre-check given that her ticket was booked in her maiden name, and the Flagship lounge people were super rude to her about it and made her go to the very back of the economy check-in line, meaning it took her around 30 minutes to clear security. I don’t know why this happened, but I’ll chalk it up to a jerk staffer and not an indictment of the entire Flagship check-in concept.) Still, something is better than nothing, which is what United offers their premium passengers at check-in.

In the end, I feel like it’s pretty obvious that the Polaris lounge is nicer, but I’ve learned many times on this blog that certain people are like diehard sports fans when it comes to airlines, so I’m sure I’ll hear from the HOW DARE YOU PRAISE UNITED IN ANY CAPACITY people in the comments before too long. In any case, both lounges are great and I’d be very happy to return to either one, so don’t get too bent out of shape over my opinion.