I have a ton of reviews backlogged right now, so I might as well get to it. We’ll start with the Hilton Stucky Molino Venice, which is not named after a guy called “Stucky Molino,” in case you were wondering. I was disappointed by that fact, but I soldiered on and had a pretty nice stay. 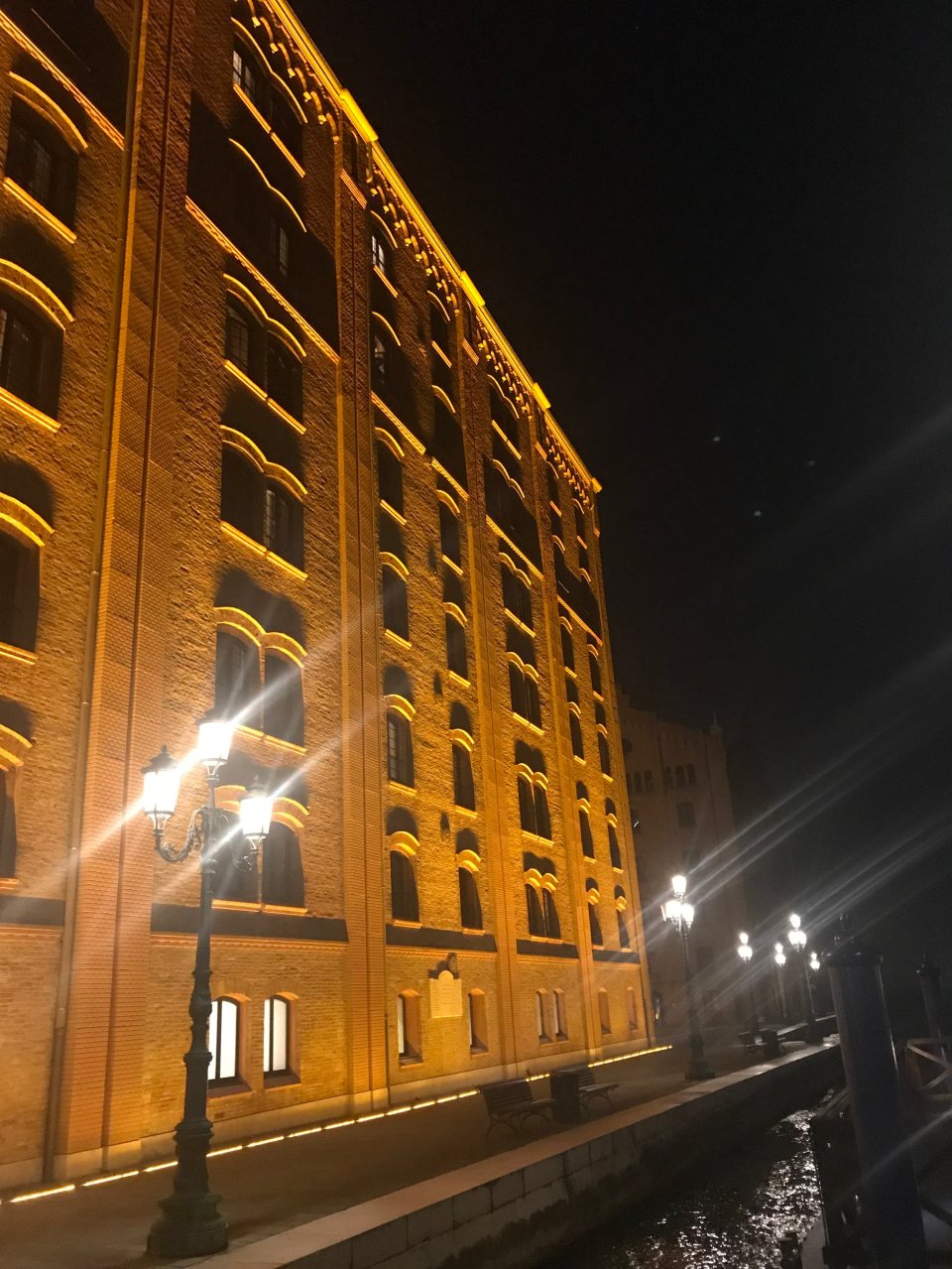 The hotel certainly cuts an imposing figure at night…

The building used to be a flour mill or something, but now it’s just a giant hotel that feels totally out of place in a city like Venice, which I associate with sleepy waterways and impossibly narrow alleys meandering between beautifully quaint buildings rather than a giant brick monolith that only Le Corbusier could love. I don’t know how much of the building is actually taken up by the hotel, but it feels like most of the population of Venice could probably live in this thing.

The main thing to know about the hotel is that it’s not on the main group of islands that make up the heart of Venice — instead, it’s across the river on the island of Giudecca. Not to worry, though, the hotel has its own boat that will shuttle you between the dock out front and St. Mark’s plaza multiple times per day. (You pay once when you check out, and it’s WAY cheaper than the public water buses.) 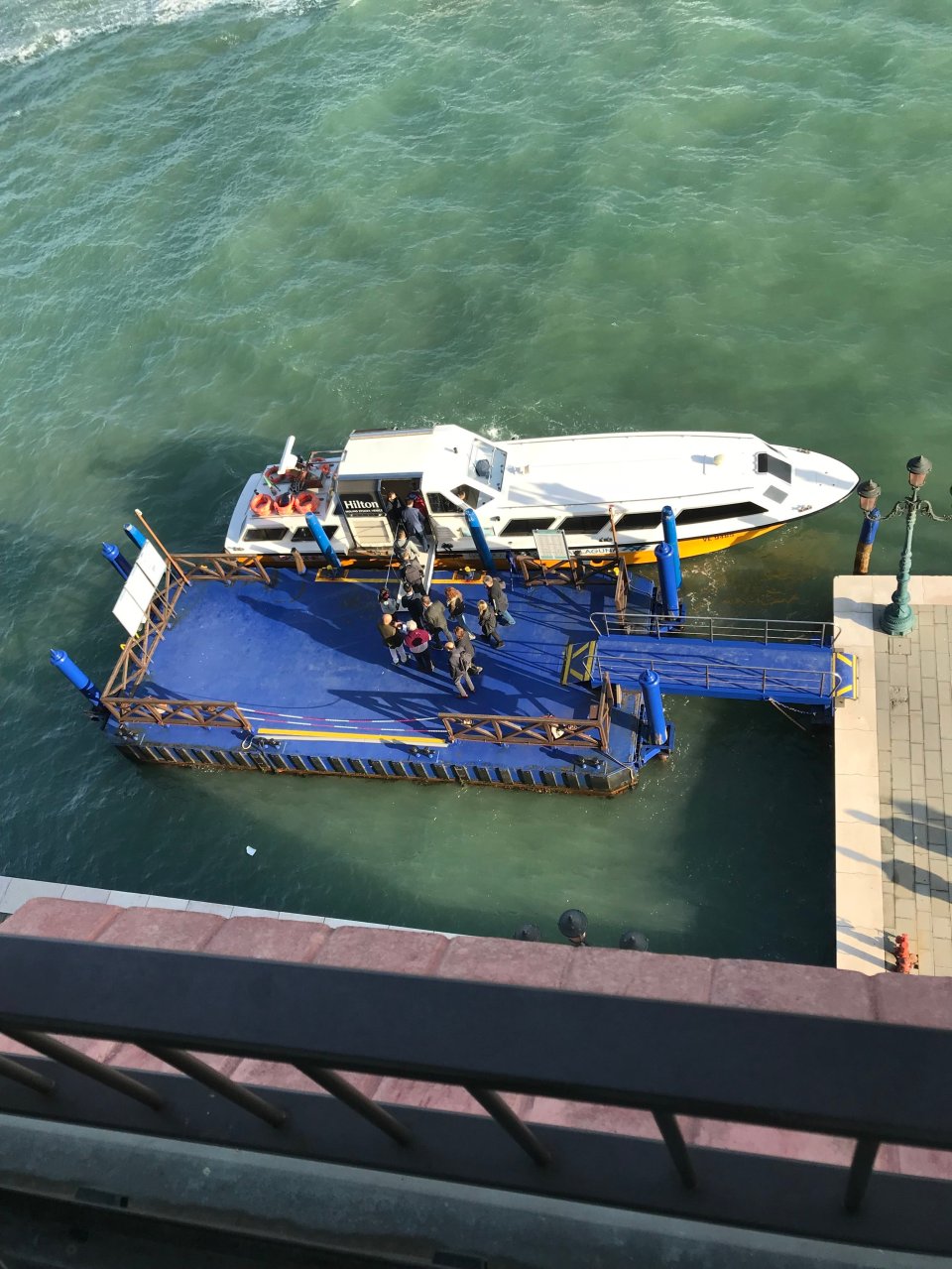 I was a little worried about feeling cut off from the action, but Justine and I actually really enjoyed Giudecca. It’s much quieter, and despite the hotel being big enough to eat every other hotel in the city, the sparsely populated island provides a nice break from the crush of tourists across the water. Plus, there are some really cheap and insanely charming restaurants along the waterfront, one of which was probably my favorite of the entire trip. Therefore, the main downside to the hotel (if you haven’t already guessed) is that it feels incredibly corporate especially in a place like Venice. There are half a million tiny little boutique hotels there, and even the fancy Fine Hotels & Resorts-ish places really hit you over the head with the fancy frills that you’d associate with a Venetian luxury hotel. The Hilton is slick and efficient, but it definitely doesn’t feel “of” the city it’s in.

I didn’t really mind, but I have been critical of hotels for this reason in the past, so I felt like I had to point it out here. Why didn’t I mind? Well, as I mentioned at the beginning, we had a really nice stay here, the room was really big, Justine liked the wooden ceilings, the breakfast spread was insane, and the rooftop terrace was incredible. Let’s start with the room. Sadly I wasn’t upgraded to a suite despite my Hilton Diamond status, but they did give us a room on a high floor with a view of the water, so I can’t complain. In retrospect, I’d rather have had the water view than the unnecessary extra space of a suite anyway, and it was an added bonus that the window opened all the way. We spent a good amount of time just relaxing in front of the window enjoying the ambience, and it’s one of the things I remember most fondly about our trip. 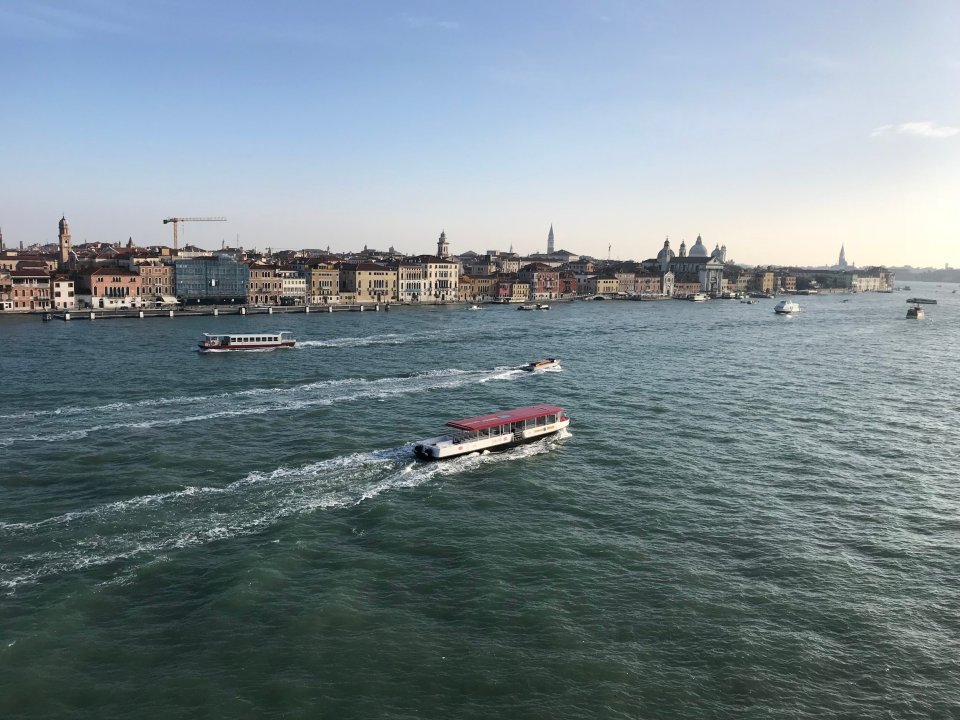 The view out our window… 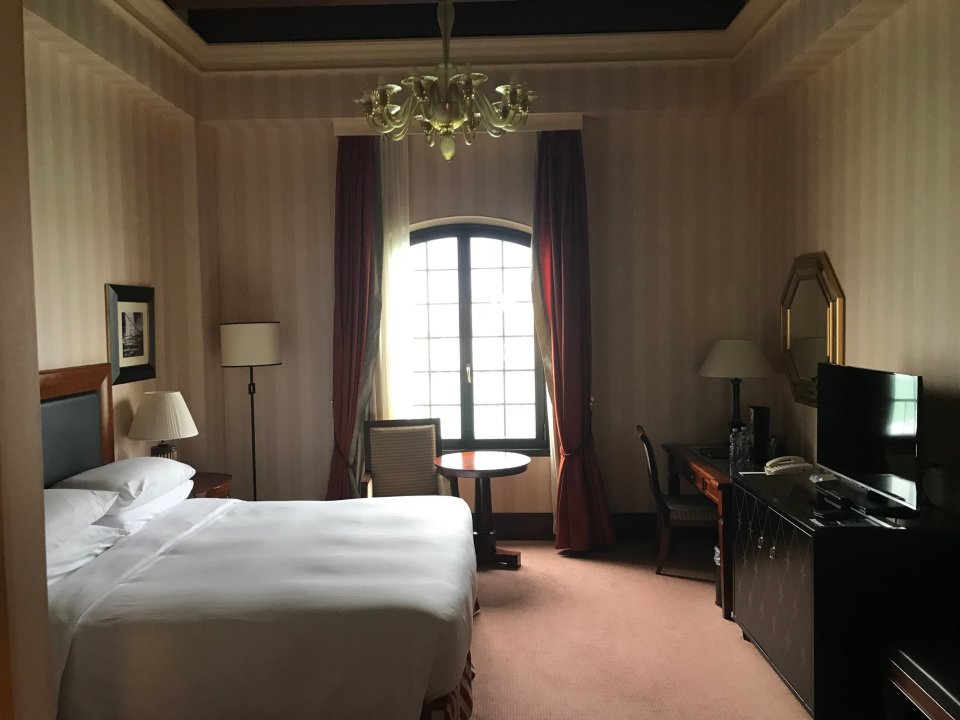 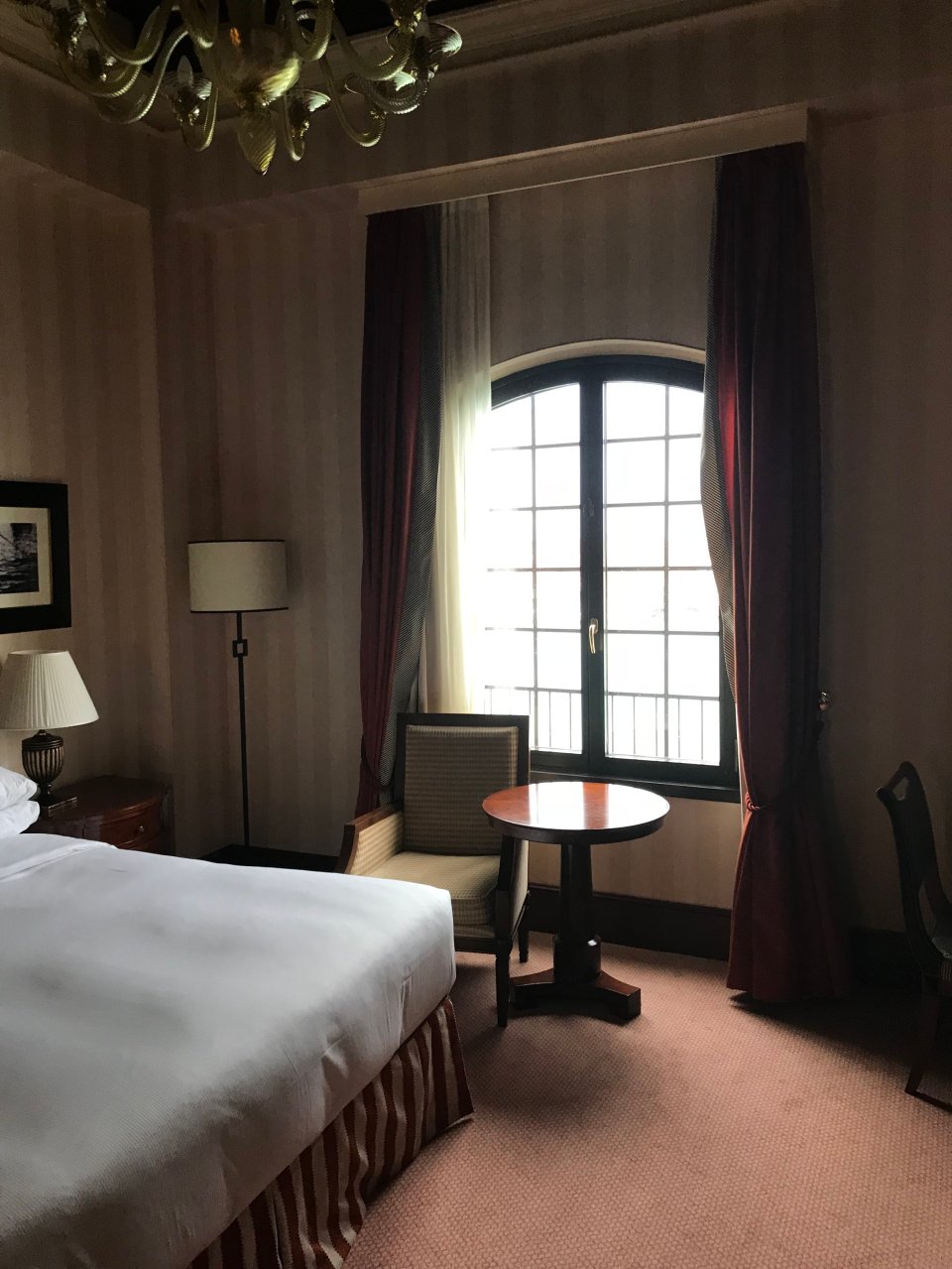 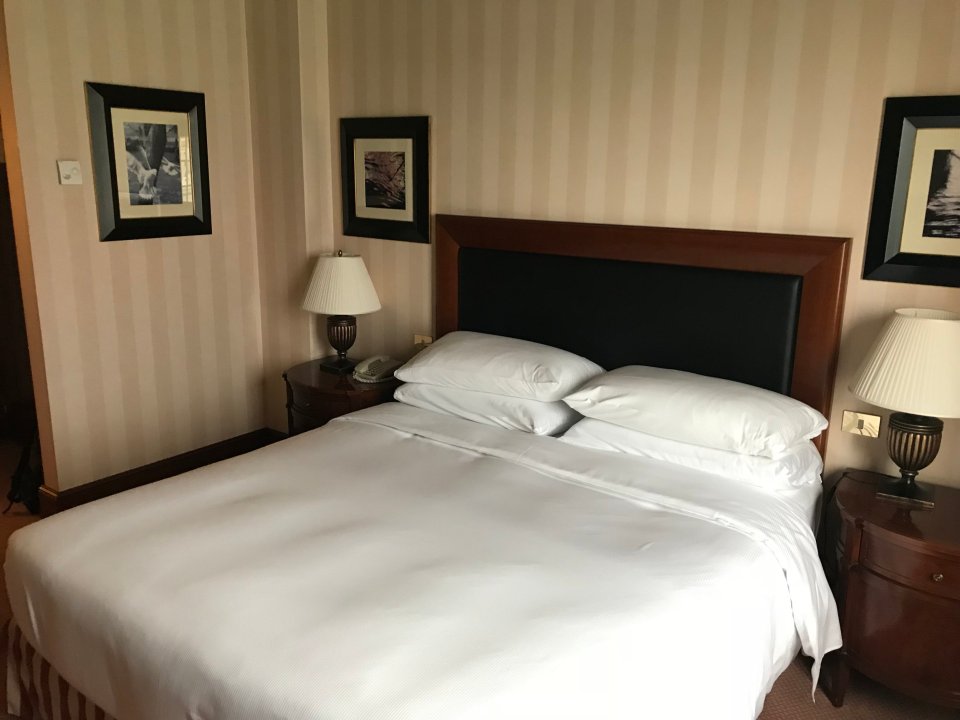 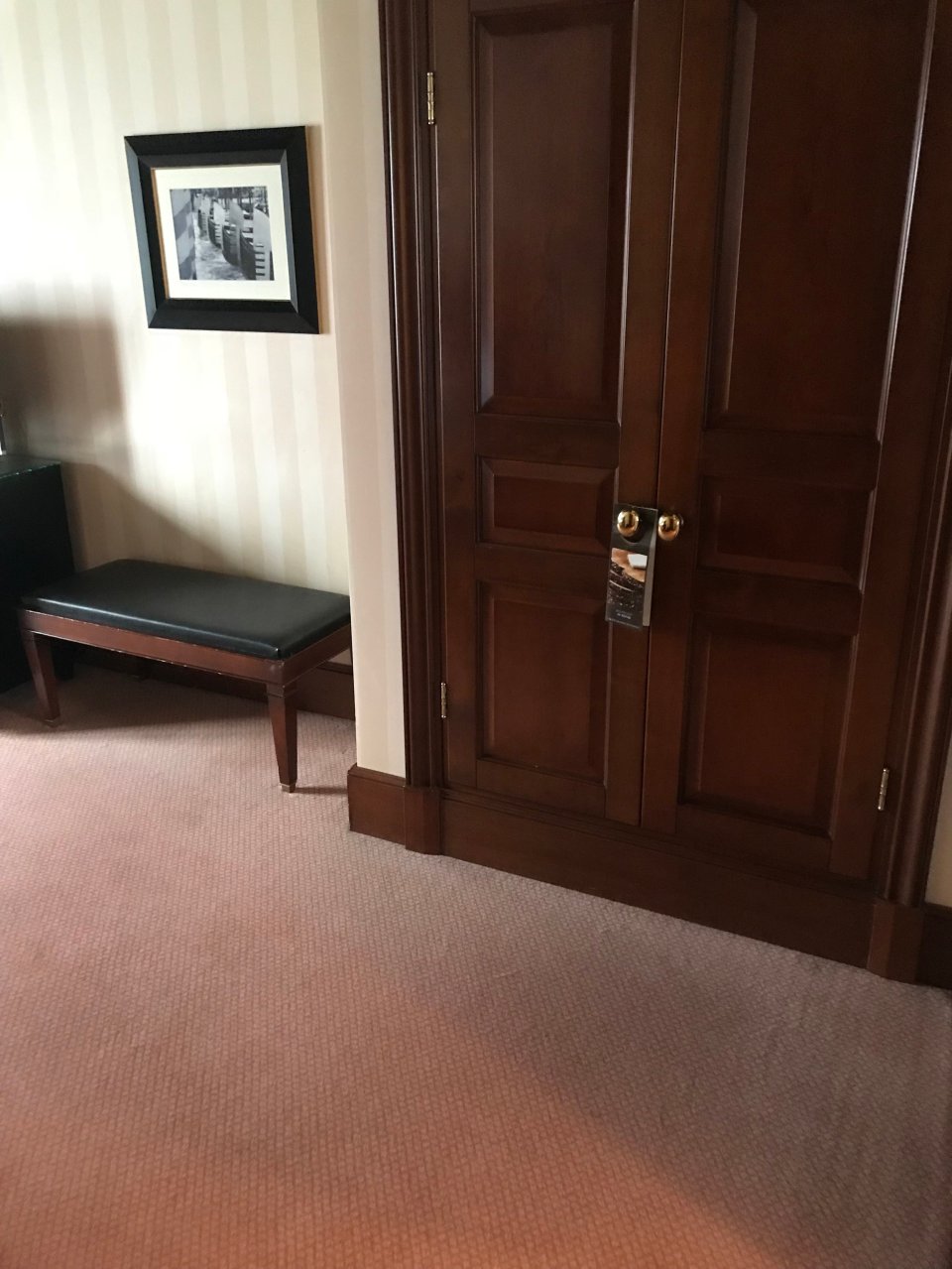 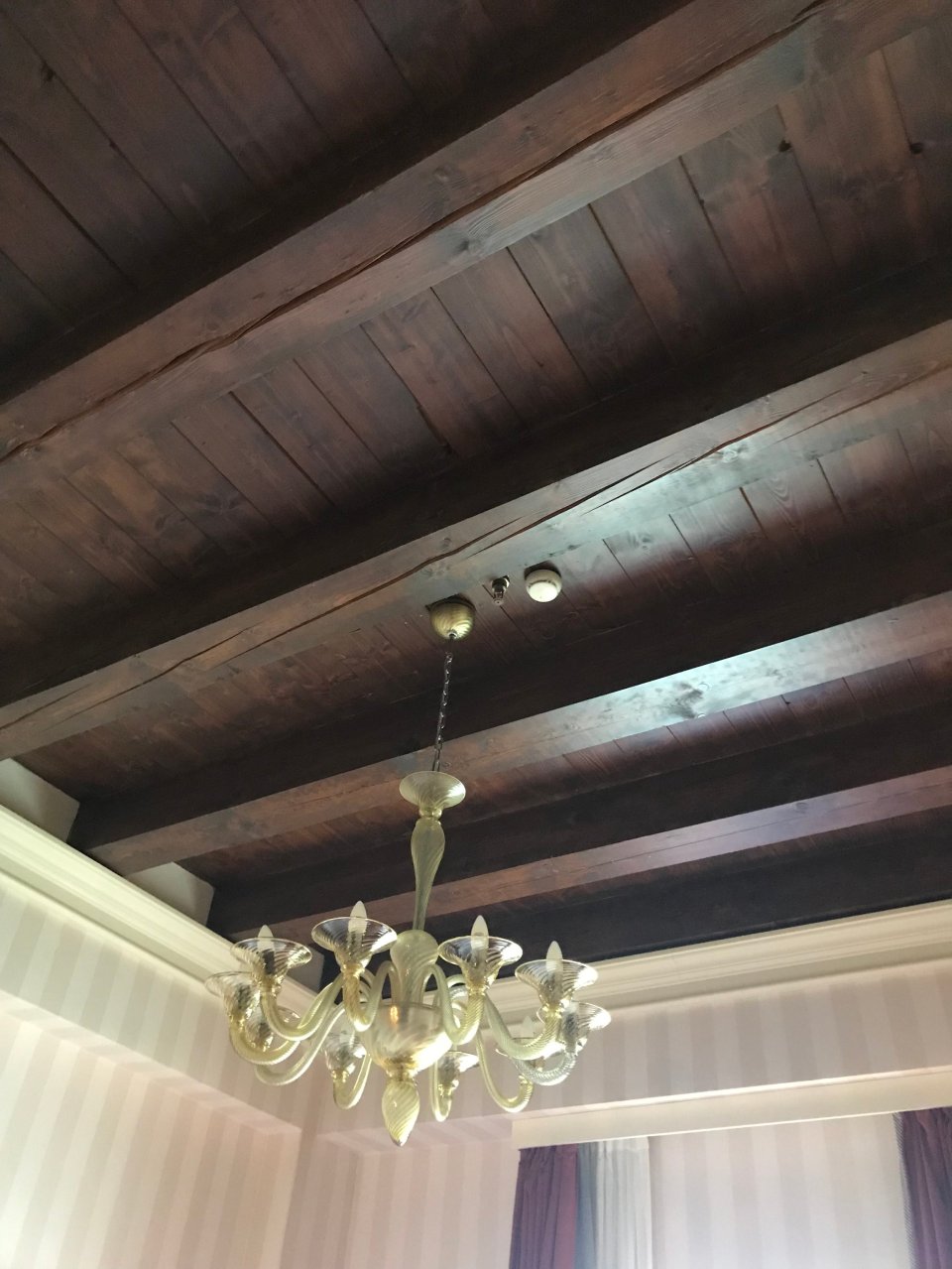 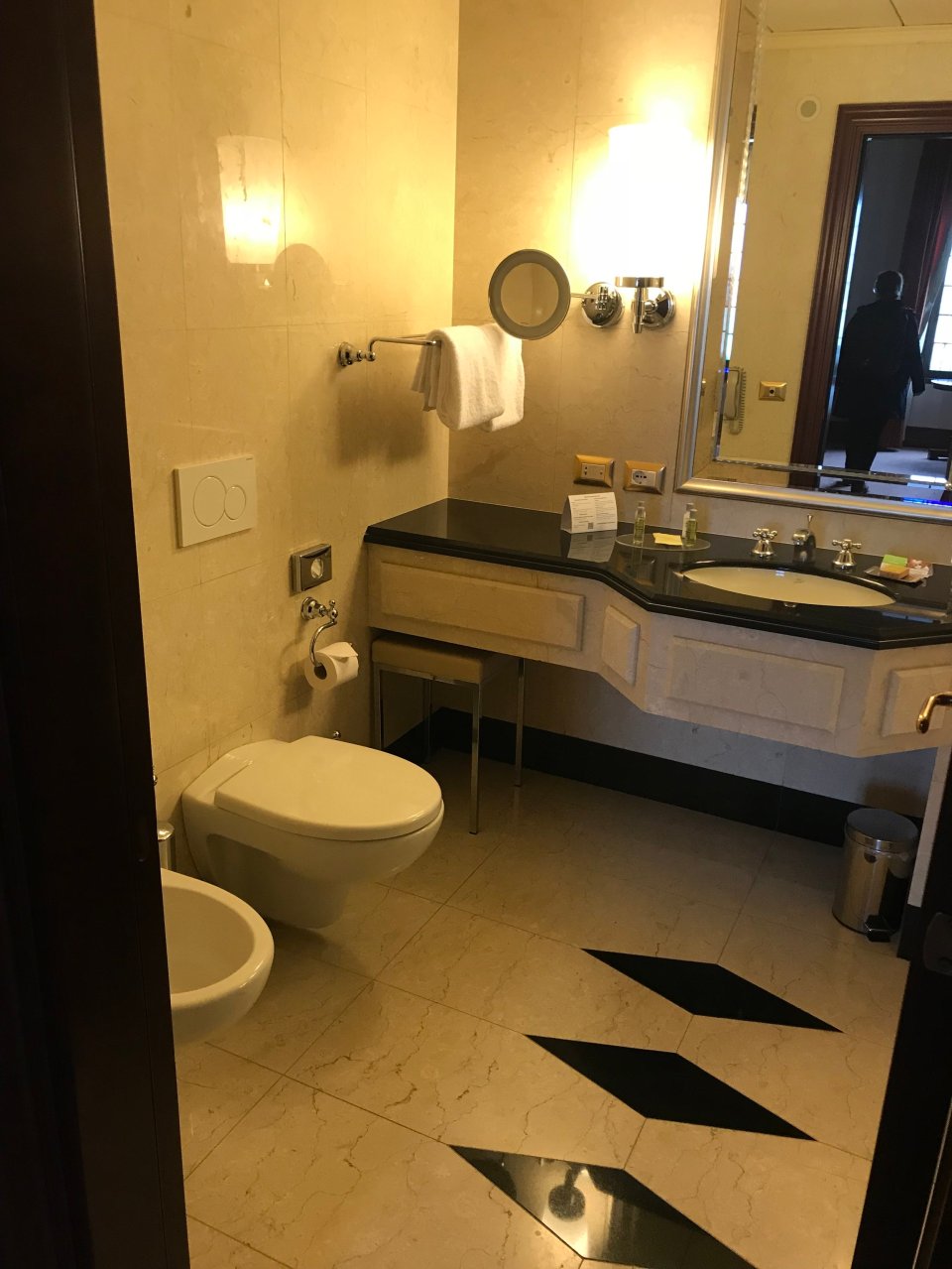 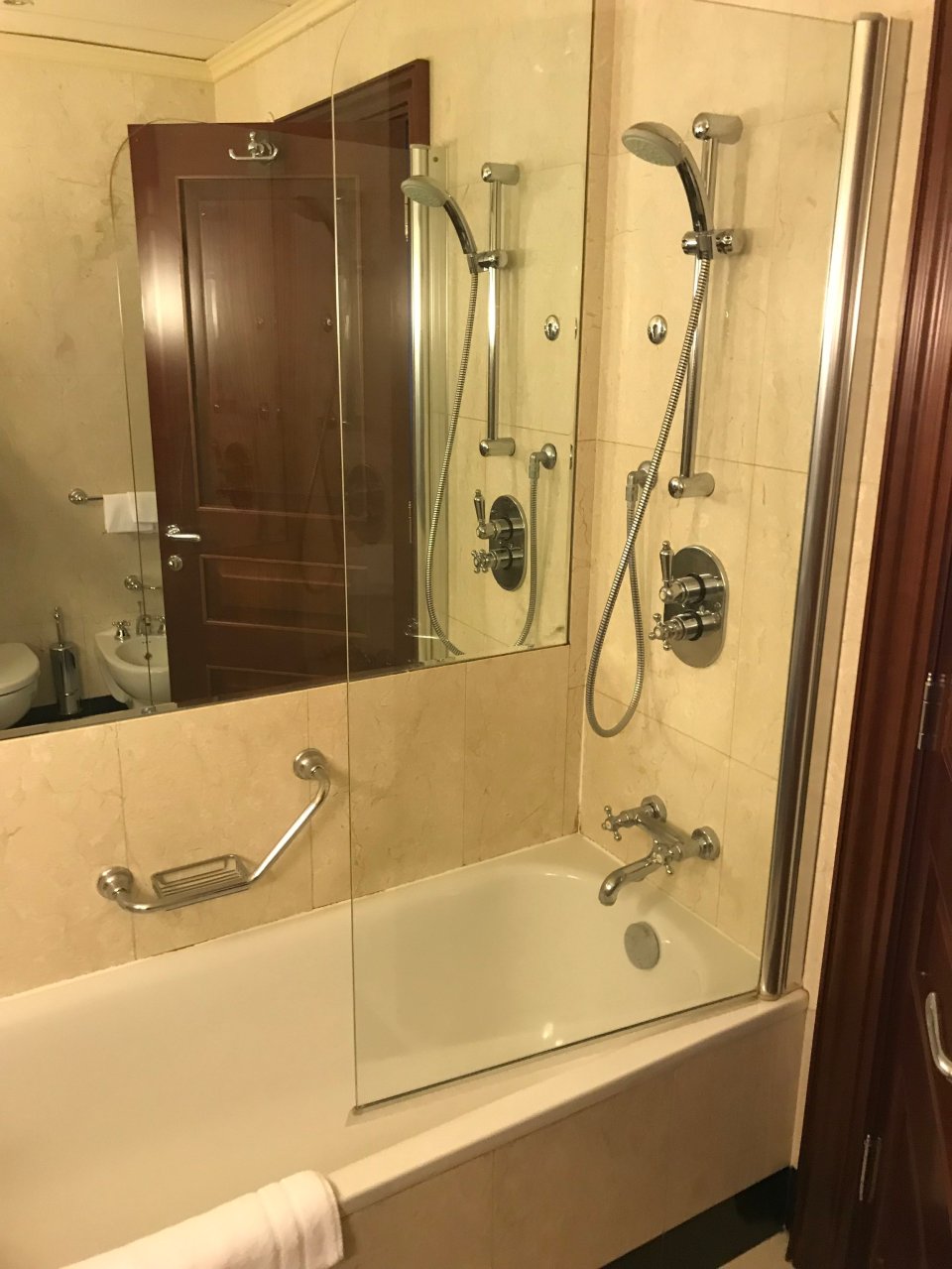 As you can see, the room is fairly basic, although it’s pretty big by Europen standards. The decor is understated, and the exposed beam ceiling and interesting light fixture gave it some personality. The bathroom was also pretty big, although the shower really sucked. The water pressure was bad, and the glass partition that keeps water from spraying all over the bathroom restricts the width of the shower, so I had a hard time reaching all my nooks and crannies without banging into it. (I just gave you a mental image that you’re furiously trying to forget, but you can’t. Merry Christmas.)

For a sexy time, I highly recommend bathing in the fuchsia glow of the rooftop terrace. The drinks are predictably expensive, but the view makes up for it. See for yourself: 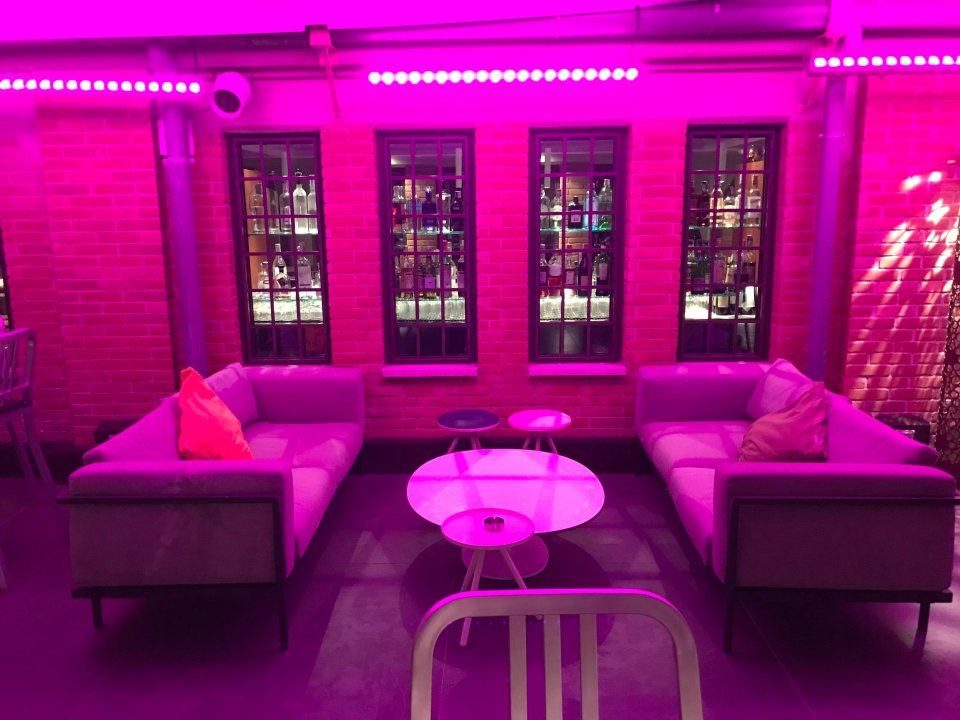 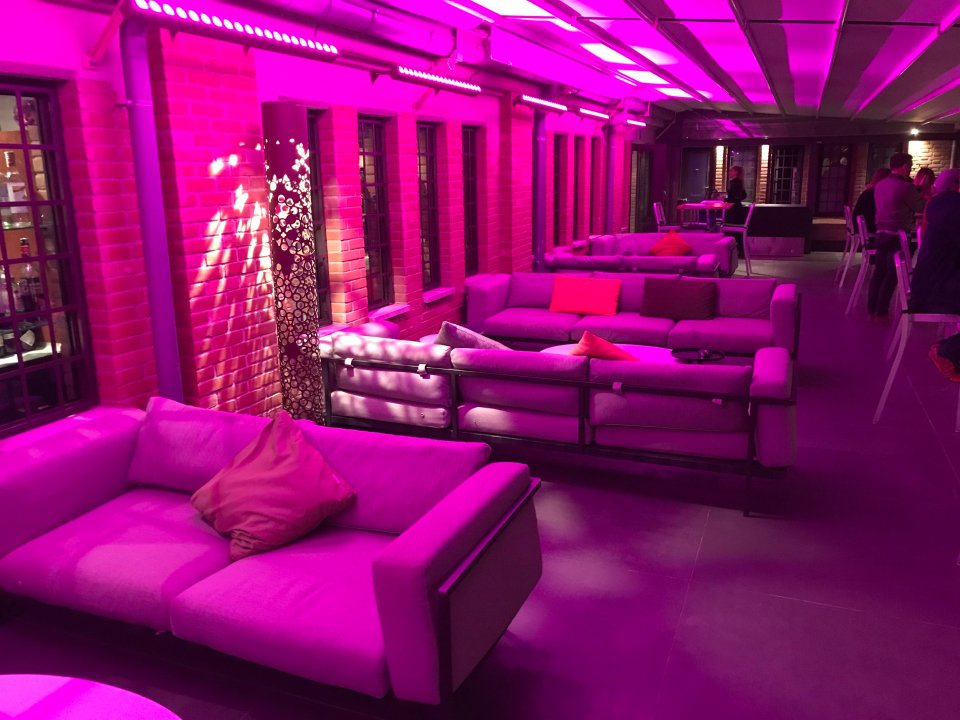 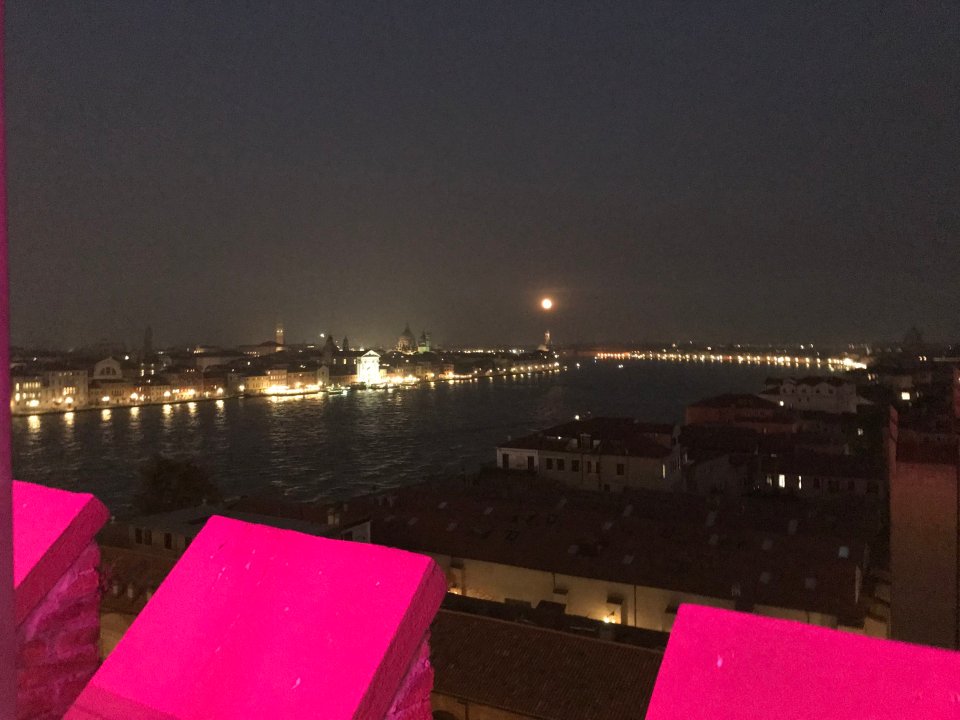 As Diamond members, we got free breakfast as well as access to the executive lounge, which is kind of a downer. In a hotel this enormous, I have a hard time believing there was no space they could use for the lounge, but for whatever reason they just partitioned off part of the lobby and called it a day. (Walking from the main wing of the hotel to the rooftop terrace involved passing multiple empty conference rooms used to store furniture, so I’m serious about there being a surplus of usable space here.) The food spread was okay, but we mainly used the lounge to grab free drinks before taking the boat each day. 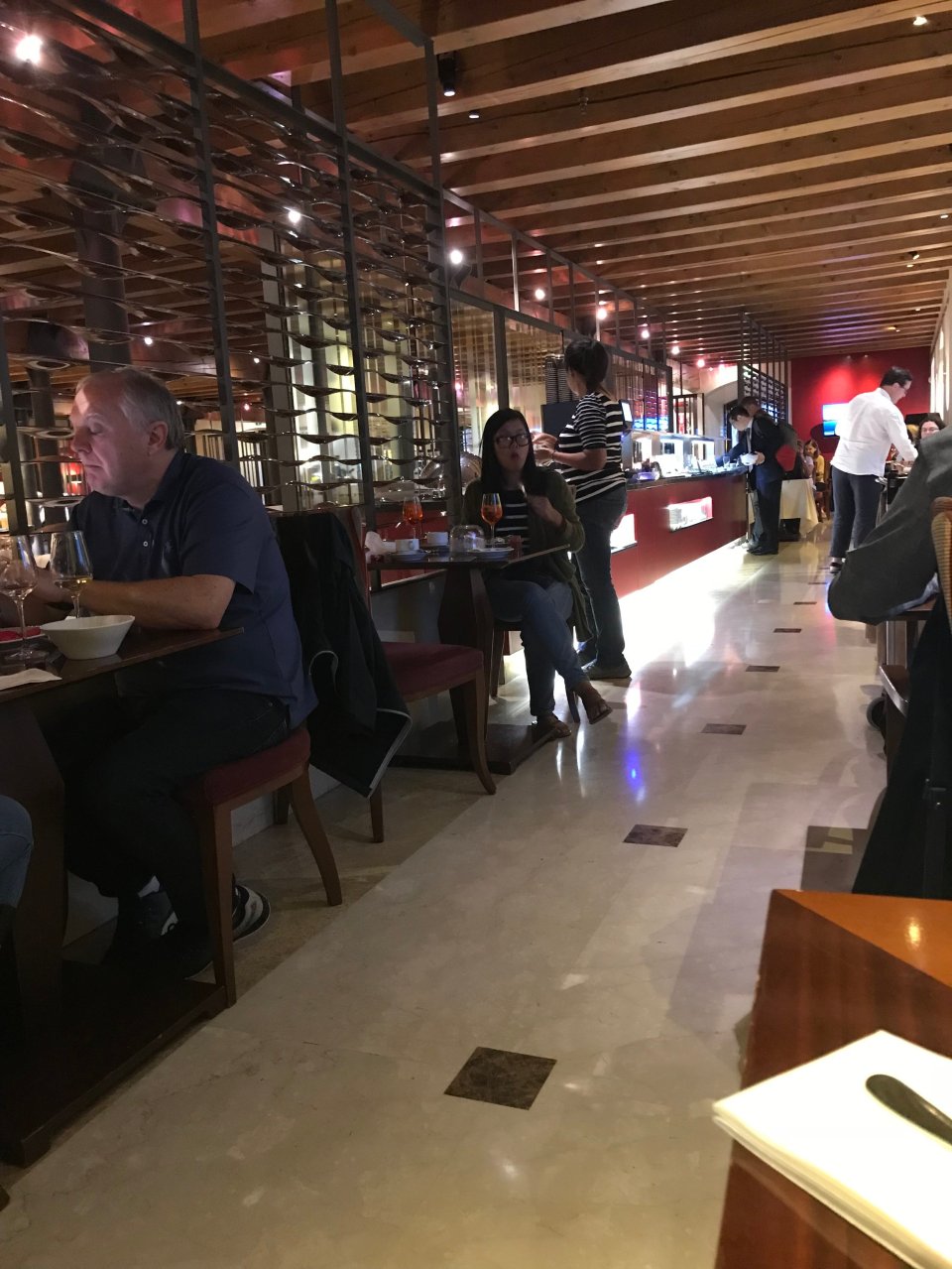 However, the breakfast buffet more than made up for any loungetastic shortcomings. There’s a separate room where they serve breakfast, which is divided into an enormous dining room and a separate area where they keep the food. Over the course of our stay, we had four breakfasts each, and we still didn’t try everything we wanted to.

Oh here’s a funny story: they have one of those toasters with the moving track (like they use at Quizno’s), and one morning this woman put two croissants in it. I guess not realizing that you don’t toast croissants, she let out a yelp when they almost immediately caught on fire, and then she scurried back to the dining room. I was kind of mesmerized by these slowly carbonizing croissants making their way through the toaster, so I just stood there and watched while the buffet area filled up with smoke. I would have taken a million pictures if I hadn’t left my stupid phone back at our table. Eventually someone from the kitchen came out and reprimanded me for toasting croissants. 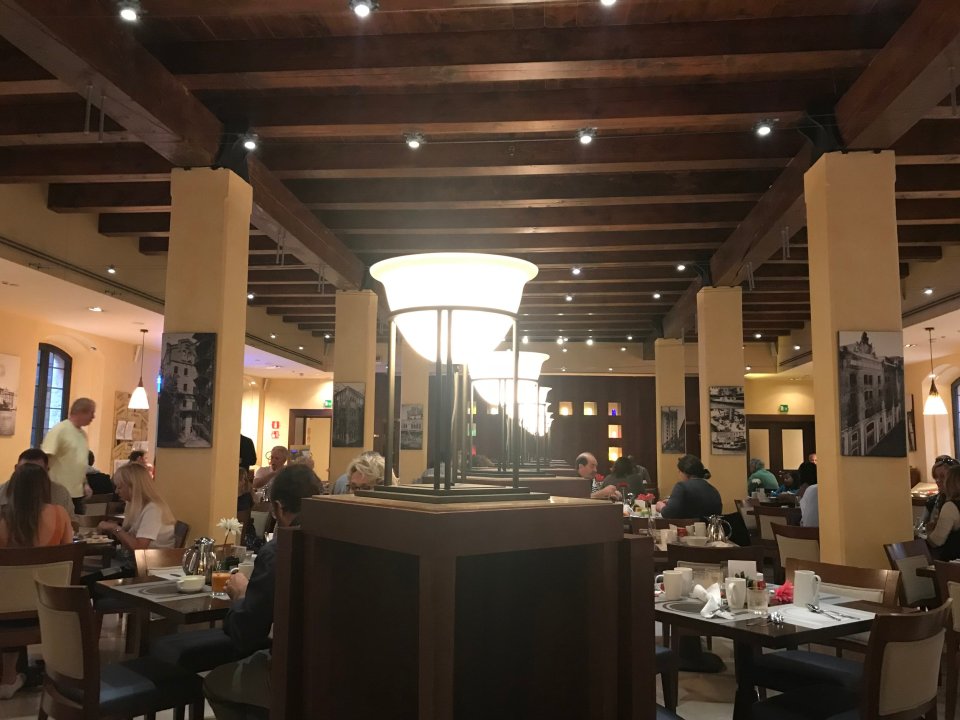 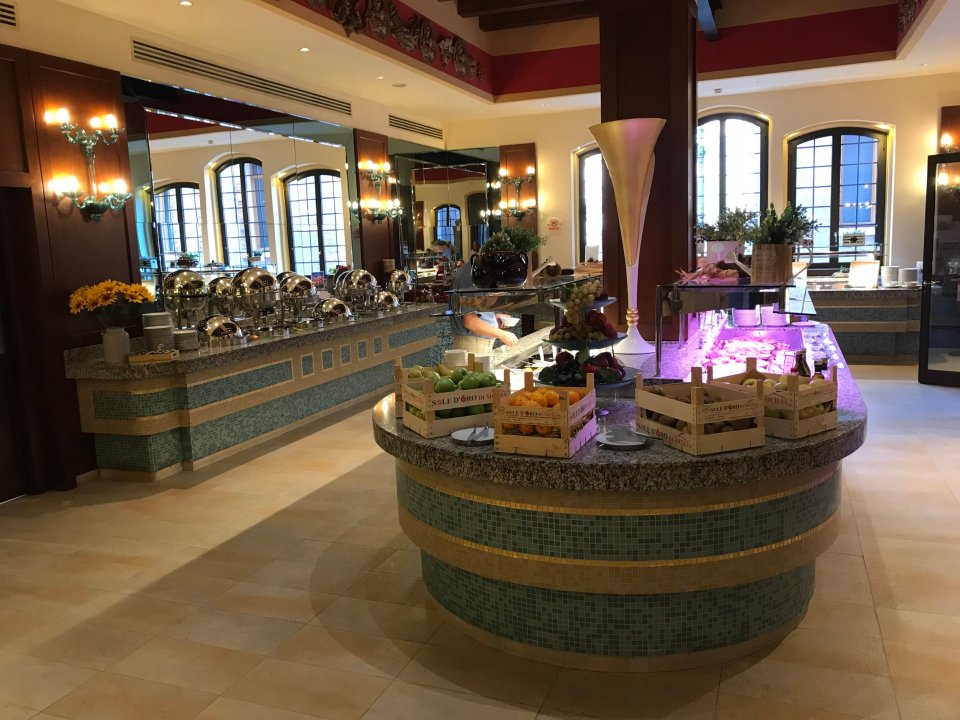 About a third of the food on offer… 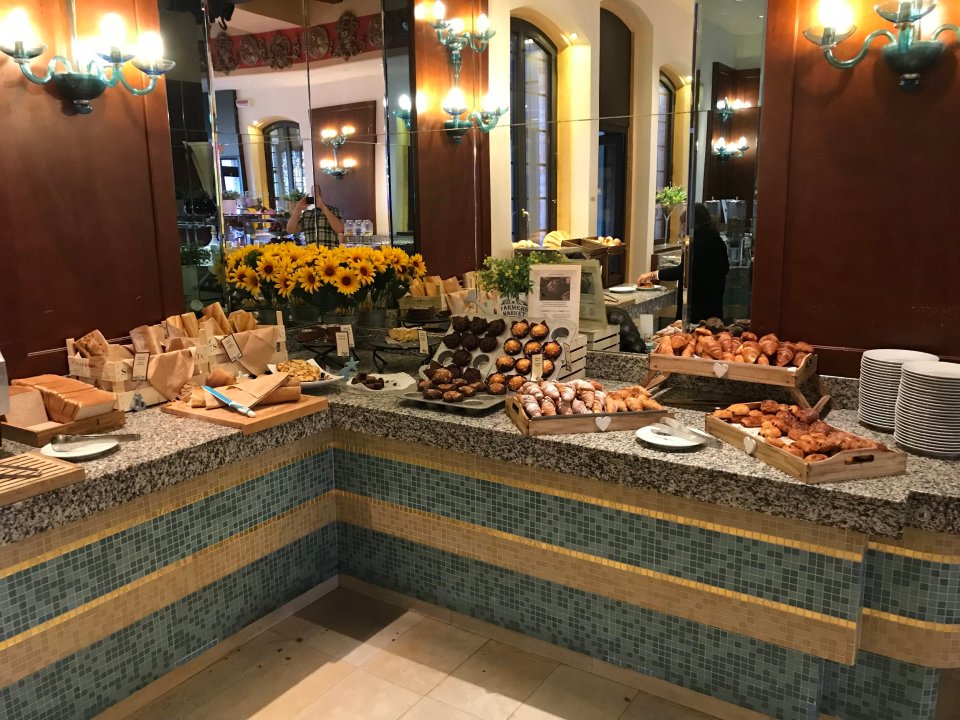 In the end, I wouldn’t hesitate to stay here again. The price was comparable to or cheaper than similar hotels, and I loved the location and the view from our room. If you’re looking for quaint and intimate, this isn’t the hotel for you, but we both had a great time. Final score: five flaming croissants out of five.

2 thoughts on “Stuck on you: A review of the Hilton Molino Stucky Venice, a hotel in Venice with a really long name”