I finally know what it feels like to be an upper-tier elite member!!! How to describe it? It’s not unlike the feeling you get when you pour pure maple syrup on a hot golden-brown waffle. Or the spark of excitement when you see a lover after an extended time apart. Now I know why people pay hundreds of dollars to go on status runs where they calculate the price-per-EQM while conveniently leaving out the fact that they’re using up sick days to fly around for no reason. 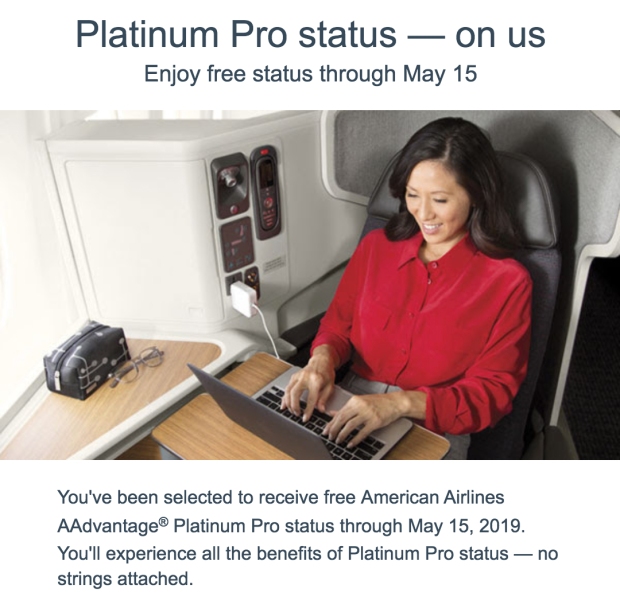 That’s right, I’m now an American AAdvantage Platinum Pro, or at least I get to play one on the internet for the next four months. I have to earn something like 20,000 EQMs in that timeframe in order to keep the status, and obviously that’s not going to happen. Even though this is American’s second-highest elite tier (not counting the invite-only Concierge Key level), I don’t expect to get much benefit out of it besides a hefty 80% bonus on earned mileage. Most of my flights on American are in paid first class (they generally have the cheapest paid first class fares between SFO and ORD, which I fly multiple times a year), so priority check-in, boarding, and upgrades aren’t that big of a deal for me. Plus, as we all know, assholes like me buying up all the first class seats are why Concierges Key and Executives Platinum are still sitting in economy because their upgrades didn’t clear.

Don’t get me wrong — things like free Main Cabin Extra seating and oneworld business class lounge access are great for people that fly American all the time, so I’m not out here saying that Platinum Pro is worthless for everyone… just that I’m not the right person to take advantage of those benefits. That said, I certainly won’t turn down the opportunity to try Platinum Pro on for size and enjoy the perks of being elite, even if it just means a bunch of extra miles on my trips to Chicago.

I’m curious about why American is doing this, though. Ever the cynic, I jumped on Twitter to note that American must be sending out these offers because elites are fleeing en masse, and they’re desperate for new loyalists. I’ve received status challenge offers before, but I can’t recall just being given free high-level status for a third of the year — I was so surprised by this offer that I did a bunch of digging before entering my info just to make sure I wasn’t being phished.

Here’s a response to my reaction that brings up a good point:

yikes, such simplistic thinking. It's all about marketing. You look at people who are in non-AA hubs and give them AA status as a way to entice them to move their travel to AA. Cities that arent hubs for any airlines are huge competitive fields between airlines.

“Simplistic thinking” may be an overly simplistic way to think about my erudite hot take, but he’s not wrong. As someone in a non-AA hub who does fly AA premium cabins multiple times a year, I suppose I’m a halfway decent target for an offer like this. And I can’t deny that the offer worked — in that I went ahead and booked a flight on American for an upcoming trip when I had originally planned to fly United due to its proximity to the SFO Centurion lounge. Now, this was solely for the additional miles and not out of a newfound sense of loyalty, but regardless of why I decided to do it, they got additional business from me due to this offer.

On the other hand, it’s no secret that people aren’t happy with American lately. After singing their praises for years, One Mile at a Time has been pretty vocal that American has lost a step and that he’s even considering giving up status with them. View from the Wing calls their new 737 MAX planes “torture tubes.” And I even heard on a podcast that Trevor from Tagging Miles is tired of American “firing customers left and right.” Those are three equally high-profile examples, but there are certainly others if you comb through the blogosphere. I don’t think it’s a stretch to say that American needs some new blood. I mean, there’s a reason Delta doesn’t have to send out offers like this, and people hate Sky Miles. Despite constantly devaluing both elite benefits and award redemptions, Delta still has a stable enough membership that they don’t need to make it rain free status like American.

Did anyone else get one of these offers? I saw people on Twitter who had received Gold or Platinum, but I don’t know how common it was to receive Platinum Pro. For anyone who’s curious, I flew American four times on revenue flights last year and once on an award flight (all in first), so maybe that makes me a hot prospect? I dunno, I like my family and all, but I’d have to shuttle between SFO and ORD a lot in order to earn Platinum Pro for real. Sorry Mom and Dad.