Despite how much I love the Faroe Islands and wish I could move there, it turns out that it’s not super easy to immigrate to Denmark. So that’s probably out. If I want to leave this shitty country forever, my options are either Svalbard (since even though it’s technically a part of Norway, you can just show up there and never leave) and New Zealand, since my wife is a full Kiwi, from her brown hair down to her inability to fly. Svalbard is probably a long shot, honestly… it’s only a 2-hour flight from mainland Europe (so not that different from the Faroe Islands), but I’m not sure I could live in a place where the sun doesn’t set for half the year.

That leaves New Zealand, a beautiful place that’s only a 22 hour flight from mainland Europe. Despite being married to a Kiwi, I’ve only ever been there once, but it was pretty great. We stayed in the North Island, and I did some hiking on Mt. Taranaki, which is a dead ringer for Mount Fuji and easily on par scenery-wise with the traditional South Island NZ scenery porn. I do have some misgivings about the place, such as the national shame of being represented by a flag carrier with a frequent flyer program as terrible as Air New Zealand Airpoints, or the fact that I was on one horribly turbulent flight going there, so naturally I assume that all fights to/from/around NZ are full-on barfatoriums. These are minor issues, of course, so I guess it’s settled and I’m moving to New Zealand.

Obviously I will keep a US address for credit-card-having purposes, but I feel like I should probably have a “native” credit card, so I think it’s time for me to do a full review of the Amex Platinum “Kiwi Special” Edition. Please note that this card actually exists and I haven’t photoshopped this screenshot at all. 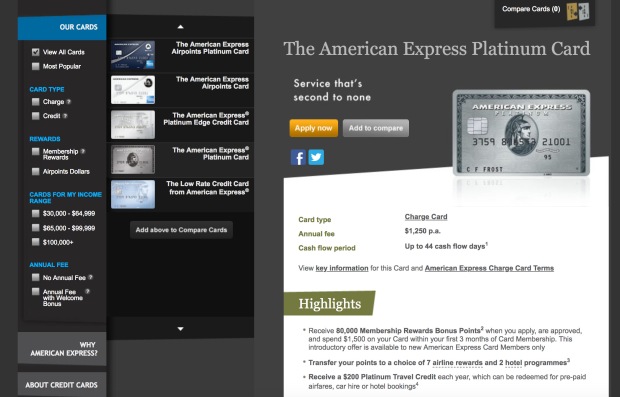 I’m gonna get real for a second: the fact that this card is plastic and couldn’t even cut a zucchini is probably reason enough why I shouldn’t move to New Zealand. However, there are a couple other things going against it, like the $1250 annual fee ($861 USD), and the fact that anyone who has or has had any Amex card in the past 12 months is ineligible for the sign-up bonus.

There are actually some interesting benefits, like a $200 travel credit that you redeem through Amex’s travel service for any prepaid travel, which effectively knocks the fee down to a much less unreasonable but still pretty unreasonable $1050 NZD/$723 USD). There’s also a $500 smartphone screen repair benefit, which you’ll probably need after your phone flies out of your hand and smashes into the ceiling during one of those bouts of extreme turbulence you’re sure to experience.

You also get a slew of elite hotel status, earning low/mid-tier status with Accor, Radisson, Marriott, Hilton, and Shangri-La. I don’t know if anyone really needs low/mid-tier status at all of those hotels at once, but the Accor program gives you a free night every year, which ain’t nothing. I have to admit, this card offers way more than I thought it would. Looking through all these benefits, this whole move-to-New-Zealand-and-get-an-Amex-Platinum plan is starting to seem pretty good.

Plus, 80k is the standard bonus plus an the card earns two points per NZD? As long as the NZ version of Membership Rewards is comparable to the US program, I’m gonna buy a one-way ticket right now. 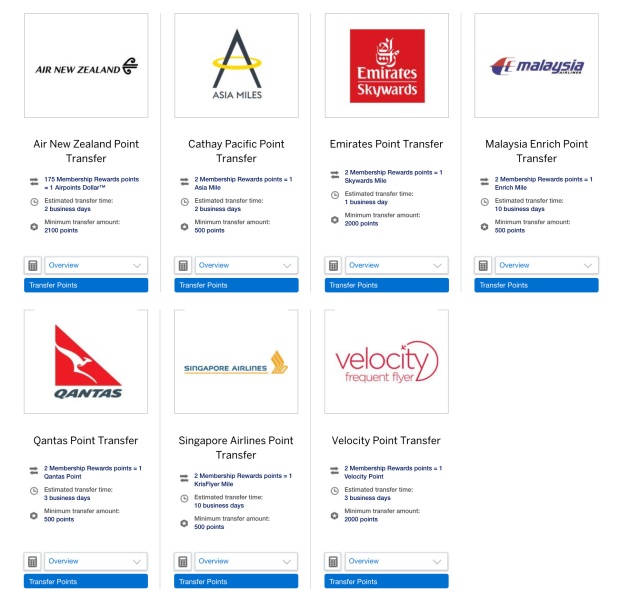 Not only are the transfer partners not very good, the transfer ratio is 2:1 for most of them… or 175:1 for Air New Zealand. Since an Airpoints dollar is worth $1 NZD toward the cost of a flight, you’re earning $1 NZD for every $87.50 spent. Given how low interchange fees are everywhere except the US, I suppose it’s worth it to be earning more than 1% on your everyday spending, but still… that’s pretty bad. You could do a lot better with Singapore, since you can get quite a bit of value of out their miles, meaning a return of 4-5% is theoretically possible. As long as the award space doesn’t disappear in the 10 days it takes to transfer your goddamn points.

The transfer ratio to hotel programs (Hilton and Bonvoy) is 1:1 at least, meaning your return on spend when transferring to Marriott is better than with Marriott’s US-based cards (when you factor in the currency spread). Christ, those clowns can’t get anything right, can they?

Okay, so I guess my imminent move to New Zealand is on hold for now, since whatever unique perks their Amex Platinum card has are obliterated by their weak-sauce Membership Rewards program. (In case any readers are excessively literal and think that I would either a) plan a move to a foreign country based on what credit cards are available or b) expect cards in a non-US country to be competitive with US cards, don’t worry, I’m not that stupid.) As a credit card obsessive, I do think the various offerings around the world are interesting to consider, which is why I’m bothering to write this post.

While I may move to New Zealand at some point, it’s a long way off… and since I’d never put my dog through the trauma of an overseas trip and 30-day quarantine, we aren’t going anywhere until she dies. (Which will never happen because I’m firmly in denial on this issue.) I’m curious, though — does anyone reading this have interesting foreign credit cards, like that one from the bank in Dubai that has a real diamond in the center of the card? Now’s your chance to brag about your rare gems.

Oh, and if you’re dead set on participating in Air New Zealand’s joke of a loyalty program, there’s an Amex Airpoints card that earns 1 Airpoints dollar per $59 spent. To put that into perspective, that means you could fly from Auckland to San Francisco round-trip in business class with only around $300,000 USD in spend. Not bad!!!

You liked this post enough to read to the end, but did you like it enough to give me money? If so, check out my Patreon page. There’s even a podcast!