This is a continuation of an earlier post about the KLM logo. In that post, I looked at the designer FHK Henrion and his groundbreaking work to bring KLM’s brand identity into the jet age with a timeless logo that has persisted nearly unchanged for over 50 years.

In this post, I’ll be looking at BEA (British European Airways, a precursor to British Airways, which was formed when BEA merged with BOAC), although it makes sense to refer back to the KLM logo, since BEA’s brand identity was also designed by FHK Henrion. However, Henrion was not able to make magic happen twice, and I happen to think his BEA identity was a flop. I may not be the only one that thinks so, by the way – a recent collection of vintage airline posters from British Airways’ considerable archive doesn’t contain a single poster from the FHK Henrion era of BEA.

Before getting to Henrion, though, I want to look at the design that Henrion was tasked with updating, since it’s one of my two or three favorite airline identities of all time. It was designed by Mary de Saulles in the late 1950s to replace BEA’s original “key” logo, and its key element is elegantly simple: the letters “B-E-A” in an italicized sans-serif font inside a red square.

The updated BEA logo is everything a logo should be: easily recognizable, easily reproducible, and beautifully efficient. Plus, the choice of font looks modern and even suggests a plane’s vertical stabilizer via the abrupt 90-degree angle of the right-hand leg of the “A.” The logo was applied to planes along with an updated livery (oh how I wish British Airways would paint a current plane with this throwback livery), and it was also expanded to ticket offices, lounges, in-flight products, and advertisements. One of the neat things about this logo is that it was able to stand on its own, but it could also be combined with an equally-sized square with either a plane or the word “fly” inside. This allowed the airline to adjust the logo presentation based on the space available in each application. Here are some photos from my copy of M.C. Huhne’s outstanding Airline Visual Identity as well as the aforementioned British Aviation Posters :

After a decade or so, BEA management wanted to update the logo, fearing it had become stale. Enter Henrion, fresh off his incredible success over at KLM. Henrion had a few main critiques of BEA’s logo (by the way, most of this info comes either from the Henrion retrospective published by Unit Editions or directly from pages in the BEA design manual that Henrion produced, some of which are reproduced in full in that same Unit Editions book). First, he felt the square was staid and wouldn’t resonate with a younger generation. Second, he didn’t like that BEA didn’t have a symbol to go along with its logotype. The KLM logo is a great example of they synergy between a symbol and a logotype – the letters are bold and distinctive, and the symbol is simple while conveying the brand’s history and heritage.

This is actually pretty rare, when you think about it. Most airlines have a logotype and a distinct symbol (British Airways, Air Canada, Lufthansa, Air France, United back when they had the tulip logo, and many, many others), and others have a logotype that is simple enough not to require an accompanying symbol (SAS, Etihad, and a many low-cost carriers). However, it’s rare for the logotype and symbol to be integrated so seamlessly into one combined mark – JAL comes to mind, but I don’t know of that many others among current airlines (suggestions welcome) – obviously Pan Am is the standard bearer here if we’re looking into the past.

Henrion specifically cited BOAC and the Speedbird logo, which went through a few transformations but more or less survived multiple design regimes at the airline (originally designed in 1932, it wasn’t discontinued until 1984).

It’s true that the Speedbird is one of the great logos in aviation history (which is what makes it all the more disappointing that British Airways mutated it into the completely forgettable “speedmarque” that currently graces their planes). As an aside regarding the speedmarque, it isn’t that it’s ugly or anything, I just find it non-communicative from a graphic design perspective. I’m sure if I had grown up in the UK, I would have a lot of positive associations with it… but I didn’t, so I don’t. There are a number of logos these days that are really just nondescript shapes, and I don’t like any of them – for example: Air France, ANA, American Airlines, and the atrocity that JAL committed when they changed their logo to this (before coming to their senses and changing it back): 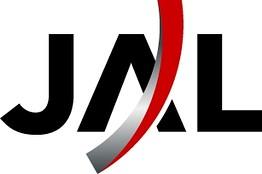 Anyway, back to BEA. Henrion wanted to create a symbol to go along with a new BEA logo, but duplicating the Speedbird was always going to be a tall order. Instead, Henrion took elements of the Union Jack and sculpted them into a symbol that communicated motion and modernity that he called the “speedjack” – more appropriate for the jet age than de Saulles’ stuffy square. In practice, the speedjack is weirdly asymmetrical and chunky, and due to its many colors, it doesn’t resize very well. That’s important, since it means that the speedjack could never be used next to the BEA logotype like BOAC used the Speedbird.

Henrion’s main issue with the square was that the extra square required to form the “Fly BEA” branding was too big, threatening to overwhelm the logo. He saw it as a confusing presentation and felt that the symbol and logotype should either balance each other in a single logo mark (like KLM), or the symbol should be clearly subordinate to the logo type (like BOAC). Ironically, however, due to the awkwardness of the speedjack, he ended up recreating the exact problem he was trying to solve. Notice in this photo how the speedjack overwhelms the presentation and pulls focus away from the BEA logotype on these timetables, for instance: 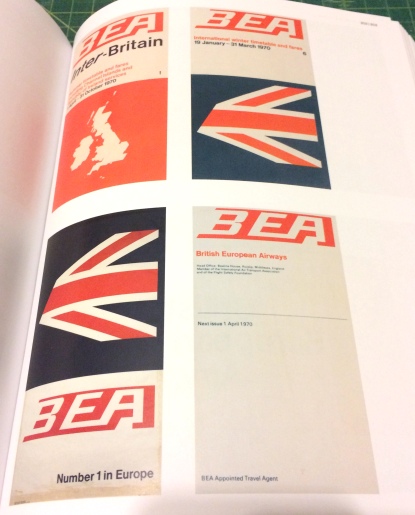 I want to talk about the logotype itself, which is where this all really falls apart…

The genesis of the logo is actually pretty cool, which is what makes it such a shame that it turned out so ungainly. Henrion “deconstructed” the red square, pulling chunks off of the top and bottom to create a leaner, more motion-focused logotype. Unfortunately, typographically speaking, it’s just weird. First, the letters aren’t spaced equally – the “B” is further away from the “E” than the “E” is from the “A.” The “E” and the “A” are connected for no reason. The right-angle on the “A” that I liked in the square logo now looks clunky, and the areas that bleed into white make the logo ultimately look unfinished. In the first post, I wrote about how Henrion did multiple blur tests with the KLM logo and selected the ultra-bold font because it was easy to recognize the letters even when the plane was in motion. Here, with the logo standing completely still on a computer screen, the “BEA” letters already look abstracted and messy. At least the square would have been recognizable as such from a distance.

And there’s my key disagreement with Henrion: I disagree with him that the original BEA logo didn’t have a symbol. The red square was the symbol. Sure it’s a nondescript shape like I was complaining about before, but BEA claimed it before anyone else was doing anything of the sort, and by virtue of being first (or at least very early), they claimed all red squares as emblematic of their brand. That’s a stroke of genius that can only come about through great design and rigorous application & consistency, and it’s even harder to reproduce. Getting rid of the red square cut off a part of BEA’s identity, which is all the more disappointing given that Henrion was British and should have had a field day with this one.

(Here’s a good point to stop and say that I’m not a design professional, and Henrion is one of the most famous corporate designers of all time. It’s entirely possible that I’m wrong and he was right, since I don’t have any credentials to fall back on. So before you light me up in the comments (or on Airliners.net), realize that I’m not writing this post as a hatchet job on Henrion or BEA – I just think this stuff is really interesting and have some opinions about it. I’d love to hear from others who disagree with me, especially from people who have first-hand experience with these liveries and didn’t just read about them in books.)

In the end, I see this as the airline wanting a solution (a “modern” logo) and then trying to find a problem. Unlike the pre-Henrion KLM logo, which did look old-fashioned, the BEA identity developed by de Saulles was groundbreaking when it was introduced and certainly didn’t look out-of-date alongside competing European airline liveries a decade later. Patrick Smith (probably my favorite aviation writer) has a bunch of great articles on his Ask The Pilot blog bemoaning the sad state of airline design today. Chief among Smith’s concerns is the dependence on swooshy, curvy flourishes that connote vitality and motion, at least according to today’s leading graphic design firms. Even my beloved KLM got in on the action, needlessly bending their distinctive stripe toward the nose of the plane really for no reason at all.

I see the new BEA logo coming from the same misplaced need to represent “motion” more literally. In a vacuum, yes a square is boring. No, a square doesn’t really mean anything. But BEA appropriated the square as part of a comprehensive corporate identity program, and at that point those abstract purported shortcomings didn’t really matter. Not having been alive at the time, I can’t speak to how people thought of BEA back in those days – maybe it really was a problem that the square made them seem behind-the-times compared to BOAC. Still, in the pursuit of a more modern logo, BEA sacrificed a part of their brand in which they had built up considerable equity, and that seems like a misstep from today’s vantage point.

How ’bout we finish this off with a poll? I don’t have a poll widget on this site, but whatever. Which livery transition is the hardest for you to stomach?