I like traveling to New York, and the last couple times I have done it, I’ve been lucky enough to fly in first class. It’s awesome, since it basically counts as an international flight in terms of the seat, but it can also get pretty expensive. I don’t have enough points to fly first class to NY a couple times a year, and transcon premium cabin saver availability is usually terrible anyway. (The one exception to this rule is Alaska/Virgin, but the downside is that they don’t have flat beds in first like United/Delta/American/JetBlue.)

That got me thinking – if not in first, what’s the best transcon experience? I used to fly SFO-BOS in Virgin economy pretty regularly, and it was always fine. For the purposes of this post, though, I’m aiming for the sweet spot in between economy and first – we’ll call it premium economy for expediency’s sake, even though each airline has their own term for it. After running through the options, here are my picks. (Keep in mind that I haven’t flown any of these recently, so this is my own speculation, not a definitive proclamation. As always, let me have it the comments if you disagree with me so much that you get angry.)

Around half of Delta’s transcons from SFO are on a 767 (the others are on 757s). The 767 economy cabin is 2-3-2, so right off the bat, there’s the benefit of not being stuck next to two people if you choose a window seat. While the shoulder room isn’t any more than you’d get on a 3-3 narrow body, having just two people and then an aisle feels less cramped to me. In the extra legroom seats, you’d get as close to a normal domestic first class as you can get without jumping up a cabin. Also, flying out of SFO as an Amex Platinum cardholder, Delta has a tie for the best lounge opportunity with their flashy Sky Club in Terminal 1.

Pricing and availability: When looking at the lowest SFO-JFK fares that I could find, Delta’s Comfort+ fare bucket prices out around $85 more than normal (not basic) economy, which goes for $190. Also, should you want to use miles, Delta’s availability corresponds much more closely to the cash fare than programs like United or American. For most flights, the lowest cash fare will also be redeemable with the lowest amount of miles. (This is in stark contrast to United and American, who will have multiple flights a day at rock bottom prices with no saver economy seats available.) It sucks, because it portends Delta’s switch to revenue-based redemption, but in this particular case, it presents an opportunity. Also, Delta is one of only two airlines here that include extra legroom seats in a separate service class, rather than selling them as an upgrade. That means that you can redeem miles for the entire cost the extra legroom seats – on all others (except Virgin), your miles would only cover the base fare, and you’d have to pay cash for the extra legroom. The best price I could find for Comfort+ was 19,000 Sky Miles. That worked out to around 1.44 cents per mile which honestly isn’t terrible for Delta. Bottom line, the widebody layout plus the flexibility to pay with all cash or all miles (and a reasonable number of miles at that) makes Delta my #1 option. 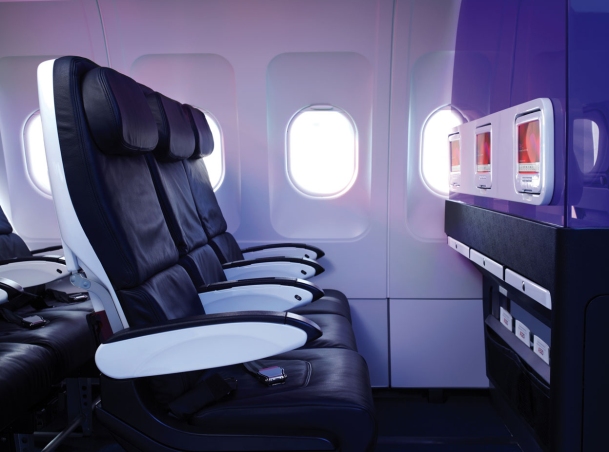 Virgin’s Main Cabin Select is a separate fare class like Delta, and the perks include free movies and free food. Most airlines offer free entertainment on transcons anyway, so the on-demand movies aren’t a huge plus, although I love ordering free snax through Virgin’s “RED” system. Legroom is also great, since the only Main Cabin Select seats are in the bulkhead row or the exit row. If I had to sit in 3-3 economy, the bulkhead on one of Virgin’s planes would definitely be my top choice. Lounge access isn’t great in SFO Terminal 2, unless you have Admiral’s Club access. However, Terminal 2 is pretty nice, and once you’ve experienced them once or twice, none of the lounges in SFO are worth getting to the airport early for anyway.

Pricing and availability: Unfortunately it’s not yet possible to redeem Alaska miles for Main Cabin Select, so if you want to redeem points, you’re stuck using Elevate points under Virgin’s revenue-based program. I do hope this changes at some point, although saver availability may be an issue with only 12 seats available per flight. Price-wise, I found these seats as low as $304, which is a $134 premium over normal economy. This puts Virgin among the most expensive options, but between the free snacks and my emotional attachment to Virgin, I’m okay paying more. 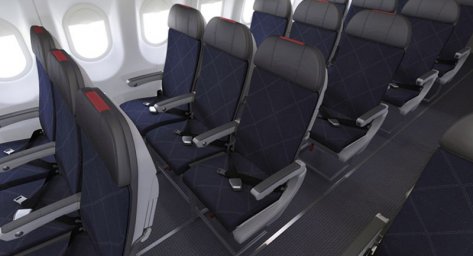 American’s A321 is the only 3-cabin plane used regularly on transcons by any airline. While you’d be in the back in this hypothetical scenario, the upside is that putting three cabins on a plane this size doesn’t leave much room for economy, so the cabin is tiny (comparatively). That means the plane boards more quickly, and there is less of a scrum around the bathrooms after American serves everyone a bean and cheese burrito with extra beans. (American flies out of SFO T2 as well, so the lounge situation would be the same as with Virgin.)

Pricing and availability: American’s saver economy availability isn’t great, and you’d have to buy up to extra legroom anyway. However, their fares are pretty good – $170 base fare was the lowest I could find, plus $88 for an extra legroom seat, making American the cheapest option overall. 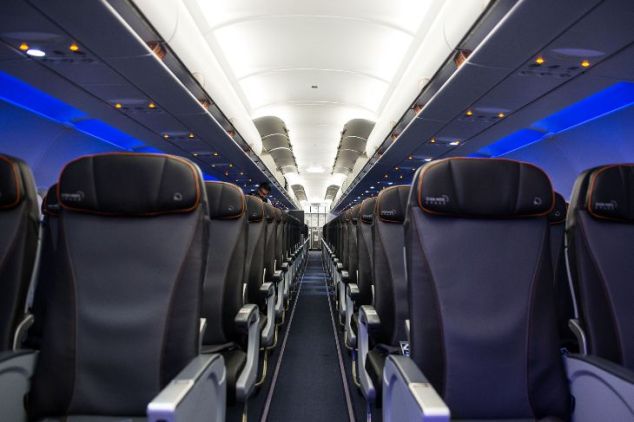 Another airline that flies an A321 on this route, although JetBlue has more seats due to only having a fairly small business class cabin up front. You’re more or less splitting hairs here between JetBlue and American, and I have a feeling most people would prefer JetBlue. My reasons for putting it here instead of #3 are all pretty small: first, there’s the larger economy cabin, plus I don’t like JetBlue’s IFE all that much. You’d actually get more legroom here than on American, but I’ll sacrifice an inch or two of legroom for on-demand movies rather than DirecTV. You may get access to the Air France lounge in the SFO international terminal via Priority Pass, although AF has been known to deny entry to Priority Pass cardholders if they’re too crowded. Of course, flying out of this terminal presents significantly better plane spotting opportunities, so that’s a small benefit. (I didn’t make a separate category for it, but I’d put Delta’s 757 on par with JetBlue.)

Pricing and availability: The best pricing I could find was $175 for a base fare plus $99 for extra legroom. The small price premium over American is another reason I put this down at #4. Since JetBlue has a revenue-based program, the redemption amounts will mirror the cash fare.

I usually try to defend United, but it’s not even close here. United mostly flies internationally-configured 757s on this route, and economy passengers benefit from upgraded entertainment and additional snackage. Lounge-wise, you’d get your pick of United Clubs if you’re using a free pass from Chase’s United card; otherwise it’s the Centurion lounge, which is definitely among SFO’s best. A lounge maketh not a flight, though. United’s 757 transcon is a fine product, but it doesn’t have any of the X-factors of the above options… no 2-3-2 seating like Delta, no sleek coolness like Virgin, no sparsely-configured aircraft like American, and no XL legroom like JetBlue. It’s middle of the road, which means price would have to be the differentiator…

Pricing and availability: … and, predictably, it isn’t. Since the introduction of basic economy, the normal economy fares are bumped up on United’s SFO-EWR route to $195, with another $129 on top of that for an extra legroom seat. Saver availability usually sucks pretty bad, too. As the second most expensive option, United falls close to the bottom.

The only reason I’m putting this one on here at all is that it comes up among the Virgin America results when you search SFO to JFK on Alaska’s website. Alaska’s Bay Area transcon is SJC-EWR, so if you live in the South Bay, this might make a lot of sense. (I have nothing against EWR and don’t find it any harder to get to/from than JFK.) However, at least according to Alaska’s seat map, the 737-900s they use on this route don’t have extra-legroom seats, which pretty much disqualifies them for me. I’m not such a snob that I won’t fly economy, but I gotta have my extra inches. You would get lounge access at the it-looks-decent-but-I-haven’t-tried-it Club at SJC lounge via Priority Pass.

Pricing and availability: Points availability is pretty good, but I’d rather save my Alaska points for a more aspirational use, since they can be tough to earn outside of churning the sign-up bonus on the Alaska credit card. Price-wise, I saw $210 as the lowest price, which puts it above all of the other options as well.

Final note: I realize this is really SFO-centric, which is due to the fact that I live near SFO. I didn’t research pricing from LAX, but obviously big swings would change the rankings. However, all costs being the same, I’d rank these options in the same order. I also mostly looked at dates in the fall, although I looked at a fairly wide range to determine the typical lowest price for each option.