I had this idea a while ago and never got around to putting it into practice – basically, I want to keep a running list of all the long haul premium seats I’ve sat in, ranked in order of preference. One reason for this is that I just like making lists and rankings (I’m pretty sure most people in this hobby have at least a low-level fetish for spreadsheets and other types of data organization). More than that, though, I care vastly more about the seat than any other aspect of the premium experience. What’s more, the seat is most consistent aspect of that experience, so I think it’s the most useful from a review perspective. Flight crews can make the difference between an exceptional flight and a downright irritating one, and food can vary considerably from flight to flight, but in both cases it’s luck of the draw. On the other hand, the seat is the seat no matter what, so as long as you know what plane you’re on, you at least know what to expect in that department.

Relative comparisons are the most useful to me as well, which is why I think it would be fun to make a master list that ranks every premium seat, and I’ll keep adding to it when I take more flights. Because I only take a trip or two a year, it will grow slowly, so you don’t have to worry about me spamming you every other week with a new entry to the list.

I also encourage you to get really mad about the rankings, since nothing brings out the ire of anonymous internet people like raking something too high or too low. Disagree? Go back and read the comments on my “best non-first class way to cross the country” post, in which my raking of United at #5 out of 6 really pissed someone off (for being too high, mind you).

Without further ado, here we go. And look who’s at the top… United! I hope “bri” comes back to tell me how laughable this is. (Oh I suppose I should also clarify that I’m not including seats that aren’t really that interesting, like some random recliner seat in domestic first class. Also, pictures are from the airline unless noted.) 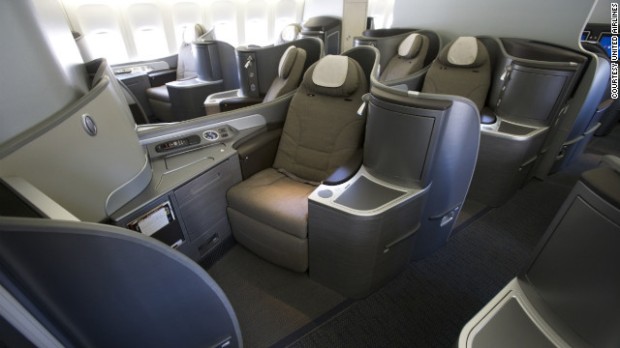 1. United Global First (777-200). “He’s bad, but he’ll die… so I like it.”  It’s ugly, but it will be gone soon… so this doesn’t really matter. But goddamn if it isn’t comfortable, even before United lays out the Polaris bedding (which doesn’t count in this ranking anyway). Plus, there’s almost an entire overhead bin’s worth of storage in and around the seat. I’m also impressed how much I liked the seat given its advanced age – I can only imagine how comfy these puppies were when they were new. The disadvantages are a lack of privacy (not that it matters all that much in an eight person cabin), a slightly annoying herringbone angle to the seat, and a dated TV screen. I like the new Polaris seat, but no more Global First is a bummer. A fancy Polaris-ized version of this seat would be fantastic.

2. SAS Business Class (A340, bulkhead). People complain about the Thompson Vantage XL seat for being coffin-like, but on SAS, the bulkheads offer significantly more personal space. It almost feels like a first class suite in the amount of space you get – the only drawback is that you’re right on the aisle, and as a bulkhead seat, you’ll get a fair amount of foot traffic going past you on the way to the bathrooms (not to mention some galley noise). I wasn’t bothered at all by that, but I was enchanted by the high-res video screen, the overall design of the cabin, the seat’s various nooks and crannies for storage, the adjustable firmness of the cushion, and the fact that seat 9H gives you a great view of the A340’s wing and engines. 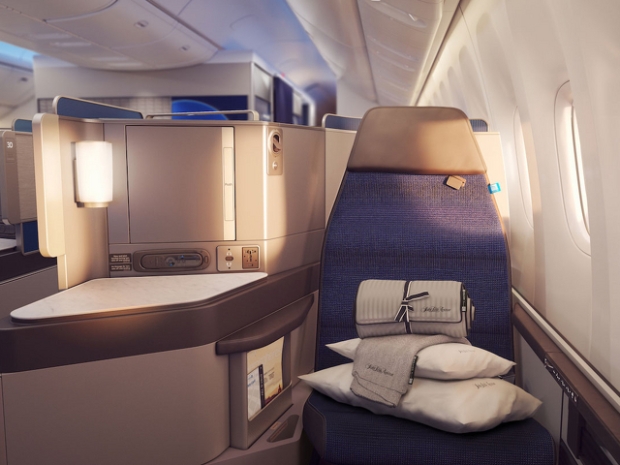 3. United Polaris (777-300, bulkhead). Two United seats in the top three?! I must be on their payroll and/or crazy. Part of that is probably due to the limited sample size and the fact that I haven’t flown most people’s overall favorite products (Cathay Pacific, Etihad, etc). But if you put aside the frankly irrational amount of hate some people have toward United, I don’t think you can deny that Polaris is a nice seat. It’s not perfect, but it manages to be incredibly private and reasonably spacious while also being fairly dense. This is another product where seat selection matters, but a window seat in the bulkhead is a great place to be, mostly due to the increased size of the footwell. The drawbacks include an inconveniently-placed cutout in the leg rest that caused my leg to slide off when in recline mode and a recline button (well more accurately a wheel) that’s easy to hit with your knee on accident. Storage is also kind of tight, although you do get a cabinet with a door and a decent nook underneath the foot rest. Plus, while it doesn’t factor into the physical comfort of the seat, the design of the cabin is gorgeous.

4. SWISS Business Class (777-300, throne seat). This is another one that’s very dependent on your seat selection. Specifically, you need to pay $200 to upgrade to a throne seat – otherwise you’re probably best off trying to find a better flight (unless you’re going to Zurich and want to fly direct). But the throne seats are wonderful bastions of privacy, and the insane amount of storage is great to have. They are a little coffin-like in bed mode, but despite the smaller-than-average footwell, I didn’t have a problem getting comfortable (and my feet are pretty big). This is another seat that gets an A+ for design, as well. Well maybe not an A+, but at least an A. They’re nice looking seats, that’s what I’m trying to say. 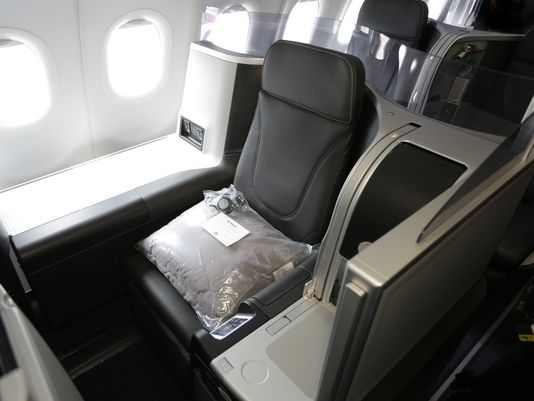 5. JetBlue Mint Suite (A321, throne seat). This is the same seat as Swiss plus a door and a shittier TV, minus a bunch of storage space and fancy finishing materials. I like the seat for sure, but I do think the door is kind of a gimmick that doesn’t give you all that much more privacy. I’d certainly trade the door for SWISS’s inflight entertainment, since JetBlue’s screens are smaller and pretty low-res. (Plus, you’re mostly limited to DirecTV, since their on-demand options suck.) The whole Mint experience is a lot more than the seat (amazing flight attendants and food, specifically), but while the seat is industry-leading for domestic flights, there are other longhaul products I prefer over it. 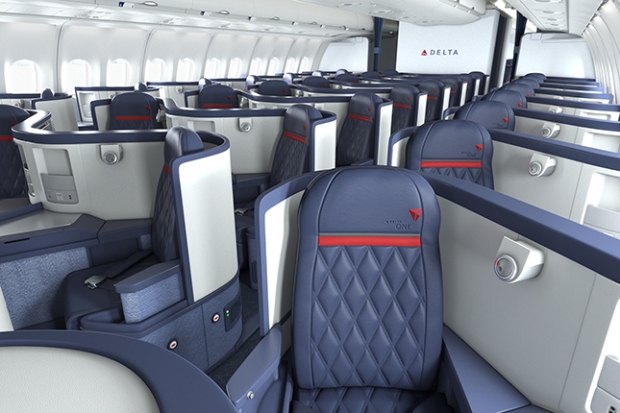 6. Delta One (A330). Okay, so this is supposed to be a great seat, because it’s in a reverse herringbone configuration, and that’s universally agreed to be the best. The problem is that it’s a really poorly executed iteration of this configuration. First, there’s almost no storage at all, so things slide around the console next to you any time there’s any movement in-flight. Second, because the A330 isn’t that wide, the seat itself is somewhat narrow, and I constantly hit my elbow on the privacy shield along the aisle when I was trying to turn around. The seat is also pretty hard, so despite the nice blanket you get, it’s not very comfortable for sleeping. The TV is okay – it’s not as crisp as on United or Swiss, but Delta has really good programming, and it gets the job done just fine. 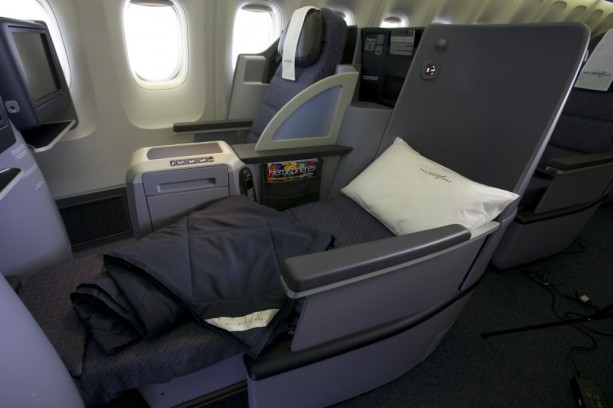 7. United p.s. (757). This was my first flatbed seat, and I did like it. The seat itself is very comfortable, but the configuration just has too many drawbacks to rank any higher. There’s very little storage aside from a little compartment behind your head, the footwell is small, and most importantly, there isn’t aisle access from each seat. I always take the window seat, which meant that I had to engage in some Cirque-du-Soleil style contortionist moves in order to get out to use the bathroom mid-flight. I don’t like having to choose between my beloved window seat and access to the bathroom, so any cabin that doesn’t offer full aisle access is going to rank lower on the list.

So that’s the list for now…  Is your blood boiling after reading my rankings and rationalizations? I sure hope it is! I’ll come back and update it in a couple months, at which time I’ll add KLM business class and British Airways first class and you can get angry all over again.

Since you read this far, maybe you want to consider supporting this blog? I’m committed to keeping it ad-free, so reader support makes a huge difference!