It’s true. I was about to write a post digging into Travel Codex’s strategy for doubling the value of your Ultimate Rewards points via the Alaska companion certificate, and in the course of researching that article, I stumbled upon this: 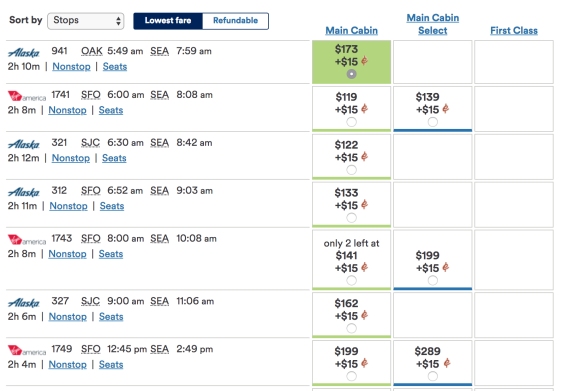 I don’t know how much this has been covered elsewhere, since I’ve actually never used Alaska’s companion fare before (despite having held three separate cards over the past couple years)… mostly because my wife and I almost never fly together unless we’re going on a vacation that involves using points for longhaul business class. I figured I’d use it at some point to position for a flight leaving from LA or Seattle, but we’ve never needed to. And when we went to Hawaii last year, the flight was long enough that it seemed worth it to wrangle first class seats despite the mind-crushingly bad use of points that first class seats to Hawaii usually requires. Anyway, I don’t view it as a huge loss, since I always apply for the Alaska card via a dummy booking on Alaska’s site, which gets me a $100 statement credit, covering the annual fee. I never hold the card after the first year, so it’s not like I’m paying for benefits that I don’t use.

Back to Virgin America, though: my penchant for first class notwithstanding, Main Cabin Select is an excellent product. You get more legroom and perks than premium economy on most other airlines, and it’s not always that much more expensive Economy Plus/Main Cabin Extra/etc. Looking at the flight matrix above, if you can stomach a 6AM flight out of SFO, you can get two main cabin extra seats for a $20 premium. If you were only looking at Alaska flights, you’d need to pay $78 for two upgrades to Premium Class, but since they’re still booking Virgin MCS into its own fare class, you can cover the cost of one upgrade with the companion certificate.

This may go away at some point, although my hope is that Alaska eventually harmonizes their own Premium Class with Virgin’s Main Cabin Select, enabling you to use the companion certificate for either one. It makes logical sense that they’d do this, given how they’re trying to position the extra legroom seats as a separate class, rather than a buy-up perk (even though that separate class is still just a buy-up perk at this point). For as long as it lasts, though, this is a great enhancement to the companion certificate – especially given that they’re still offering $0 certificates as a sign-up bonus (as opposed to the $99 that the companion fare usually costs).

As an aside, is it too much to ask for BofA to introduce a premium Alaska card? I’m thinking of something along the lines of the Amex Delta Reserve, with a companion certificate that could be applied to first class flights, Board Room membership, and maybe some other perks as well. I’m not sure I’d be able to get it, since BofA is reportedly getting tighter with approvals lately — in fact, my application for a 4th Alaska card yesterday went to pending, which is the first time that has happened. (For reference, I only have one other card open at this point, which is why I was surprised that I didn’t get auto approved.) If I do get rejected, I’ll make sure to exhaustively document the ensuing retention call.

I’ll get around to that post about the Travel Codex article soon, although the realization about Main Cabin Select seemed more exciting, so I figured it warranted its own post. Has anyone used a companion certificate this way? Was it amazing? I sure hope so.

Since you read this far, maybe you want to consider supporting this blog? I’m committed to keeping it ad-free, so reader support makes a huge difference!